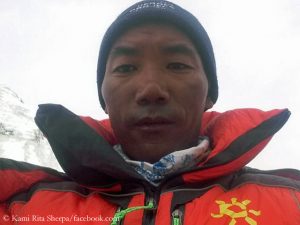 Inspired by the father

Kami Rita Sherpa was born in the village of Thame in the Khumbu region, near Everest. His family lives in the second generation on mountaineering tourism. Kami’s father hired for expeditions in the 1950s. His career ended when he suffered severe frostbite during climbing. “My inspiration has always been my father,” Kami Rita told the newspaper “Kathmandu Post”. “ He is the one who drives me forward and always pushes me to do great things. As he never climbed Everest, I wanted to do it for him.” That’s what also Kami’s older brother, Lakpa Rita Sherpa, did, so far 17 times. Lakpa also wrote history when he became the first Nepali to complete the collection of the “Seven Summits”, the highest mountains of all continents, with a summit success on Kilimanjaro in 2009. 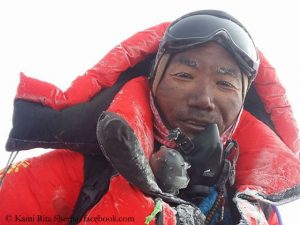 When Kami Rita stood on the roof of the world for the first time in 1994, he was one of 49 climbers who reached the summit of Everest that spring season. In spring 2017 there were more than 600 climbers on the top.  “The dangers are still there: the crevasses are deep and the slopes are unpredictable. But we are not climbing blind like we used to, ” the Sherpa compares his ascents earlier and today. “We are better informed about weather and other condition on the mountain.” Even if he succeeds his record climb, Kami Rita Sherpa does not want to turn his back on Everest. “My goal is to reach the summit at least 25 times.”

Phurba Tashi at base camp 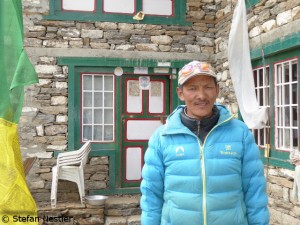 The 47-year-old Phurba Tashi Sherpa, one of the three current record holders, will also be on the highest mountain in the world this spring, but does not want to set a new record. “Phurba will be at BC and will not be trying to climb Everest again,” New Zealander Russell Brice, head of the expedition operator “Himalayan Experience”, writes to me. “The record means nothing to me,” Phurba told me two years ago when I visited him at home in Khumjung. “It is much more important to come down healthy again. Finally, I have a wife and five children, I have to feed them.” The third record holder, Apa Sherpa, who comes from Thame like Kami Rita, is now living in the United States. The 58-year-old has finished his Everest career in 2011.