Sherpas on descent from Camp 3

The ABC is, of course, only temporarily deserted. “Almost all have descended further down,” says Ralf. Before their first summit attempt, the members of the commercial expeditions were to breathe “thicker air” in the so-called “Chinese Base Camp” at 5,200 meters or even further down. According to Dujmovits, the route has been secured with fixed ropes up to 8,300 meters, on Thursday or Friday the work should be completed up to the summit. There are about 140 climbers from abroad on the north side, in addition about as many Sherpas – only half as many mountaineers as on the Nepalese south side of Everest, where a total of around 750 foreign and local climbers are en route. View down to the North Col (on the left Cho Oyu)

“I will take a three, four days break to regenerate completely,” says Ralf. “I will stay here in ABC and will not descend further down. I see no reason for that. I feel really well. Let’s see how the weather is developing.” The 55-year-old wants to make one more attempt – his eighth – to scale Everest without bottled oxygen. During his summit success in fall 1992, he had used a breathing mask above the South Col, in bad weather. Dujmovits had summited the other 13 eight-thousanders without supplemental oxygen. Only on Everest, he failed again and again – for different reasons. In his “definitively last” attempt, he treats himself to a safety feature: Ralf has engaged Mingma Sherpa, a Sherpa from the Khumbu area, who will be carrying a bottle of oxygen for the German – just in case of an emergency. Should he be forced to use the bottle, Ralf wants to descend immediately. It does not look like this at the moment. “I am quite confident,” says Ralf. After his pre-acclimatization trip in the Khumbu, where he had scaled the six-thousander Cholatse along with his partner Nancy Hansen, he feels “in an above-average good shape”. The night at 7,700 meters, however, was “mixed”, admits Dujmovits. “I had probably eaten something wrong before.” This morning he had packed up in snowfall and descended: “It has been nearly windless for days. That’s why clowds are forming, and it begins to snow.”

Visibility to the feet

The partly heavy snowfalls in the Himalayas have thwarted some summit attempts on eight-thousanders. So the German climber Thomas Lämmle, who wants to scale Makalu without bottled oxygen, today turned around in Camp 3 at nearly 7,500 meters. The Spaniard Kilian Jornet, meanwhile on the way to Everest, in his own words reached on Sunday in heavy snowfall a point on Cho Oyu he thought to be the highest: “Honestly, I am not sure that this was the summit, as I could only see my feet, but I was at some point around (the summit).” 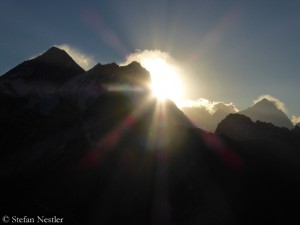