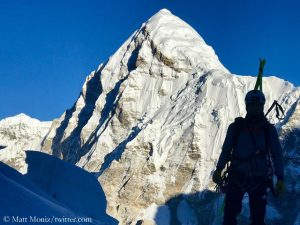 No reason for a guilty conscience

Suddenly, they were faced with the Ministry of Tourism’s accusation that they had been skiing illegally because they only had a climbing permit for Everest and Lhotse but not the required “ski permit”. “We were not aware of the permit,” Moniz wrote on Twitter, announcing that they would promptly pay the $ 1,000 per man and a garbage fee of $ 500. The two climbers do not need to have a bad conscience. Their liaison officer was (o wonder!) not in the base camp. Other representatives of the ministry at the foot of Everest said nothing when Matt and Moniz set off with skies on their shoulders. The vast majority of foreign climbers may also have been completely unaware of the existence of such a ski permit. Finally, there is no mention of the need to obtain a separate permit for skiing in the “Tourism Act, 2035”, in which the government of Nepal has summarized the expedition rules.  Only in fall 2013, there was a similar case. At that time, the two Italian ski mountaineers Federico Colli and Edmond Joyeusaz got in trouble with the Nepali authorities on Lhotse because of an initially missing ski permit. 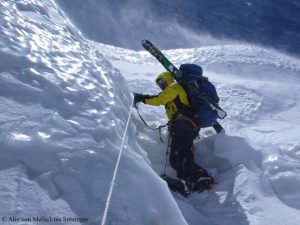 The Argentine Willie Benegas is an “old hand” in the Himalayas. For over 20 years, he has been organizing expeditions with his twin brother Damian. Willie has already scaled Everest eleven times. If even he did not know that ski permits exist at all, that says a lot. Also for the German ski mountaineer Luis Stitzinger, who has scaled seven eight-thousanders and in whose baggage his skis are never missing, the existence of such a special permit is completely new. “We have never been told anything like that,” the 49-year-old writes to me. “I think that’s pure profiteering. What should be so different about skiing?”

Information only on Nepali Julius Seidenader is among the few in the Himalayan scene who know about ski permits at all. The 26-year-old belongs to the founding members of the “Ski and Snowboarding Foundation Nepal”, which has set the goal of teaching young Nepali skiing, snowboarding and ski touring. According to Seidenader, ski permits are issued for groups of 20 people maximum and are valid for only ten days. For the first ten expedition members, the permit costs $ 1,000, and starting with the eleventh person, $ 100 each. Furthermore, an additional liaison officer must be hired. However, this information is only available in Nepali, not in English, says Julius. Against this background, it would be a scandal if Matt Moniz and Willie Benegas really lose their permits for Lhotse and Everest. It is already a farce.

Update 10 May: In a letter sent to the Tourism Ministry, 150 Climbing Sherpas have asked the government not to withdraw the permits for Benegas and Moniz. They pointed out the great merits of the Benegas brothers for Nepal. They had given many people from Nepal jobs and were involved in numerous rescue operations on Everest, it said.