A lot of disquiet 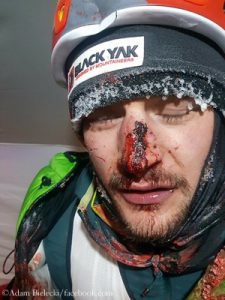 Adam Bielecki after being hit by a stone

The expedition, which brought together the best Polish high altitude climbers, was not running smoothly. First, a part of the team was involved in the rescue operation for Elisabeth Revol and Tomek Mackiewicz on Nanga Parbat. Then, within a few days, two climbers were injured by falling rocks on the Basque route. Bielecki broke his nose but was able to continue the expedition. Rafal Fronia broke his forearm and had to leave early. The team switched to the Abruzzi route. The solo ascent of Denis Urubko, who had not consulted his plan with expedition leader Wielicki, caused further disquiet. The 44-year-old reached an altitude of 7,600 meters, before storm and deep snow stopped him. After returning to the base camp Urubko left the expedition.