Alex Txikon meanwhile travelled with his Sherpa team to Islamabad. There he meets his Spanish climbing partner Felix Criado and other compatriots from the K2 expedition team – as well as the Poles Marek Klonowski and Pawel Dunaj. Both have participated several times in winter expeditions to Nanga Parbat. “We will certainly not play the first fiddle if we play the fiddle at all,” said Pawel in an interview with the Polish radio station “RMF 24”. “But we will try to support Alex as much as we can.” 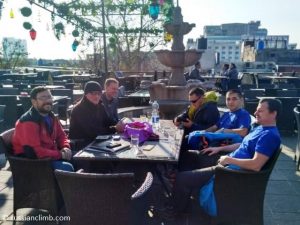 While Txikon’s team grew, the K2 winter expedition team from Russia, Kyrgyzstan and Kazakhstan shrank from eleven climbers – as originally planned – to seven, due to lack of money. Now the experienced Kazakh Vassily Pivtsov, who has already scaled all 14 eight-thousanders, will lead only six climbers: the Russians Artem Brown, Roman Abildaev and Konstantin Shepelev, the Kazakh Tursunali Aubakirov and Dmitry Muraviov and the Kyrgyz Mikhail Danichkin. The mountaineers from the former CIS states are on their way to Northern Pakistan.

Nardi and Ballard in Camp 1 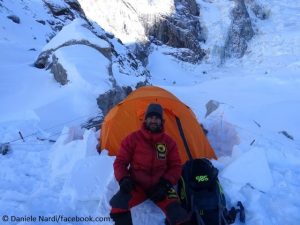 Still in the old year the Italian Daniele Nardi and the Brit Tom Ballard arrived in the base camp at the foot of Nanga Parbat. As reported, they want to climb together with the two Pakistani Rahmat Ullah Baig and Kareem Hayat the 8125-meter-high mountain on a new route via the Mummery Rib in the Diamir Face, which has not yet been mastered. They already reached Camp 1 at 4,700 meters.