Inside the ‘battery cage’: Prostitution in Germany 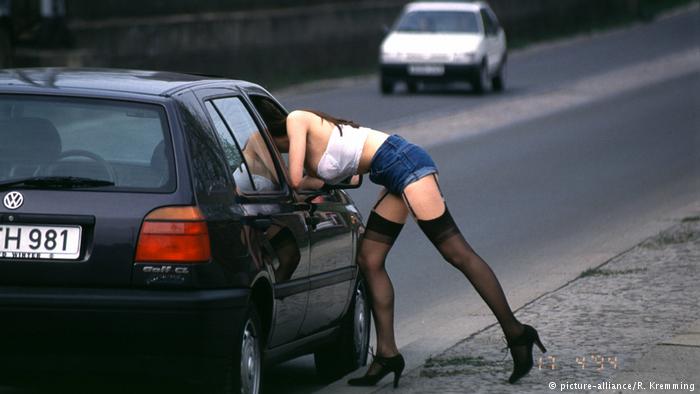 Drugs, violence, fatal intimidation: Women sell their bodies for as little as €39 in Germany, while others reap the profits of the transaction. DW met one woman who described her experience as a former sex trade worker.

On most nights, she would take ten or twelve, sometimes as many as fourteen men up to her room, where she would endure until three in the morning.

“That’s all I could bear,” Julia told DW, using the name that her clients call her by.

Other women, she said, the ones that worked all night and catered for clients’ more unusual demands would get through the long hours on a cocktail of alcohol and drugs.

DW is unable to verify the woman’s story independently. But it tallies with accounts by social workers and police acquainted with the sex industry. Julia also showed DW pictures from her time as a sex worker. She asked that they be withheld, along with her real name.

First on the street, then in private homes, in brothels and bars in Switzerland, France, Greece and finally in Germany, Julia spent a decade selling her body — until March 10 of this year, a day she’s unlikely to forget: “The client gave me €100 ($116) for the hour, everything normal. And that was it.”

It was her last client, her last day as a sex worker, the last day of so many dominated by the constant worry that she might not be able to make enough money to pay the €130 daily rent for the room in the brothel where she worked and lived. Every evening, regardless of whether she was sick, regardless of whether it was a good night or bad, she had to hand over the money, totaling almost €4,000 every month.

That day was also the last in the endless cycle of long nights and short days, the forced smiles and faked cheerfulness.

When Julia decided to enter the sex industry in her early twenties, she knew it might not be easy, she told DW. “But it was a lot harder than I expected.”

She had opted for sex work “because I wanted a better life for my children.” She had given birth to her first of two children when she was fourteen and left school when she was still in her teens.

An old, slightly grainy picture on her cell phone shows a woman with peroxide blond hair, high heels and gaudy underwear, posing for the camera in a brightly illuminated hallway.

Julia struggled to explain why she kept the photos. “I was young,” she said, almost apologetically.

It’s hard to reconcile the old photos with the woman whom DW met on a hot day in late May in a counseling center for sex workers in Stuttgart, an industrial town in southern Germany. Perched on a couch, her makeup discreet, her plain plaid shirt buttoned up, she spoke eloquently and calmly about her time as a sex worker and her decision to leave the profession. 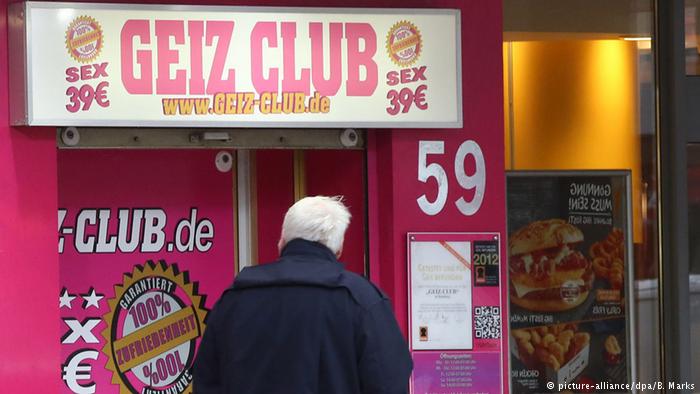 Women sell their bodies for as little as €39

No welfare, maybe a bus ticket

In the end, Julia realized that despite working most nights, she was unable to put any money aside for herself and her two sons. She told DW about the panic attacks that started creeping up on her almost every day a few months ago. “Sometimes, I have to take Xanax,” she said, referring to an anti-anxiety drug.

Panic attacks, depression and insomnia are usual symptoms of the trade, according to Sabine Constabel. She is the head of Sisters, an organization that aims to help women leave the sex trade. Sisters helps them find a place to live and pays for their expenses until they can stand on their own feet. Women like Julia don’t qualify for welfare payments from the German state, given that they never paid taxes.

“At the most, they’ll get a bus ticket back home,” Constabel said.

Constabel is convinced that sex work is nothing else than rape. It’s a word she keeps on repeating. “The trade commodifies women. They’re nothing more than dirt.”

Constabel and her organization advocate a total ban on sex work. Women and men who voluntarily enter the trade? Nothing but a myth, propaganda propagated by lobbying groups propped up by brothel owners, she told DW.

Constabel’s view is controversial: Other organizations in Germany that support sex workers do differentiate between voluntary sex work and forced prostitution.

It’s a distinction that German lawmakers also make. Sex work was officially recognized as a profession back in 2002. In theory, women and men can now register as sex workers and pay into the social insurance system. So far, only a minority of sex workers do so.

A law enacted in 2017 proscribes that brothels and prostitutes be better monitored.

One thing is clear: There’s a constant supply of women who enter the trade. Whenever Sisters or a different organization helps a woman start a new life, someone else quickly takes her place.

“It’s terrible. The room’s immediately taken by a new woman,” Constabel said. The main reason driving women into prostitution, she explained, was poverty.

It’s impossible to say how many women and men work as sex workers in Germany. It could be tens of thousands, maybe as many as 400,000, a figure that social workers keep on citing. There are no official figures, and it was only in 2017 that the German government decided to collect data.

It’s clear though that the majority of sex workers are from Eastern Europe, mostly from the EU’s two poorest countries, Romania and Bulgaria. According to figures released by the European Commission in late 2016, the average monthly income in Romania is roughly €480, with wide regional discrepancies. A smaller number of sex workers are African, many from Nigeria.

As a sex worker, Julia told DW, she was able to send more money home than she would have ever been able to make back in Romania.

And despite everything, she did experience moments of happiness during her decade as a sex worker. She smiled when she told DW about her first holiday with her family, how she had been able to put aside enough money to take her sons and mother to Greece. “We’d never seen the sea before.”

Later in the afternoon, just a few steps from the counseling center where DW met Julia, the narrow, cobbled streets that make up the small red-light district of Stuttgart were still mostly empty. The orange and pink billboards advertising “girls girls girls” and silhouettes of women in high heels were still switched off, the bars deserted. The sole figure was a bulky man, his tattooed arms crossed in front of his chest, who stared menacingly at anyone inspecting the neighborhood too closely.

It’s possible that he was one of the men that Wolfgang Fink from the State Criminal Police Office (LKA) of Baden-Württemberg knows all too well: The men whose names he has seen tattooed across women’s backs and thighs in huge black letters, marking them as their property.

Gang members and even family members

These men are members of the violent Hells Angels or United Tribuns, criminal and often violent gangs that dominate the sex trade and fill the brothels with a steady flow of women.

Fink, who has been investigating the trade for a decade, says brothels are “battery cages,” just like those used for confining egg-laying hens. He points to the artificial lighting and high temperature. The women strutting around in their scanty clothing barely know whether it’s sunny or raining outside.

“They hardly ever leave the brothel. I’ve questioned women who don’t even know what season it is.”

In talking to Fink, his anger and his disgust for the pimps is palpable. Often, they ensnare young women, pretending to love and care for them, only to revert to violence. The policeman knows of women who have been beaten to death; of uncles, even brothers, who cajole, then force their relatives to sell their bodies. 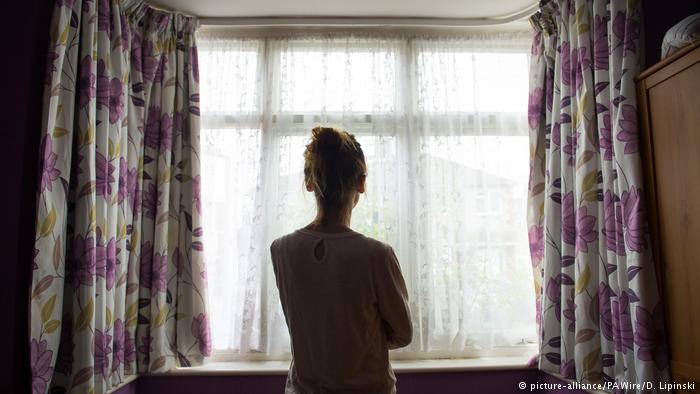 Many women are forcibly kept inside the brothels, completely unaware of the outside world.

The pimps exercise such a control over the women that few dare appear as a witness in court. But without their statements, the authorities are unable to prosecute, and the men often walk free. Sometimes a movement of the hand — Fink snaps his fingers to illustrate his point — is enough to silence the women in court.

Another problem is that the sex trade is moving online, making it harder to investigate, he says.

It’s not really his job to come up with solutions, but the policeman has given the matter some thought. Prostitution is legal for women over 18, but Fink is convinced that this age is far too young. “Look, they’re so young, basically still girls. They don’t understand what they’re getting themselves into.”

He doesn’t think prostitution should necessarily be made illegal, but sex workers should be able to keep the money they earn, rather than having to give most of it to pimps.

Julia was adamant she never had a pimp. That would make her a rare exception among the foreign women in the sex trade. “It’s practically impossible to come here independently,” Fink said.

But even after repeated questioning she stuck with her story: She never had a pimp, even though she was regularly approached by men offering to be her “protectors.” She said she refused them all, as she was well aware that she would have to give them most of the money she made. She also told DW that she hardly ever experienced violence.

Looking back, she said she wouldn’t opt for sex work again.

She loves being “normal,” she said, smiling when she recalled how she threw out the gaudy clothes she used to wear, the underwear and high heels, and bought blouses, a long skirt, practical shoes. “That felt great.”

Soon, Julia hopes, she might be able to turn her temp job with a cleaning company into regular employment, so that she can find her own apartment and finally live with her two children.

She’s got longer-term plans, too: Enroll in German classes and train as a nurse for elderly people, or maybe work in a nail salon.

And, she said, she might even be lucky and find a man who loves her “the way I am.” She smiled.