Female Embodiment: “A woman’s body is a place where decisions are made for her” 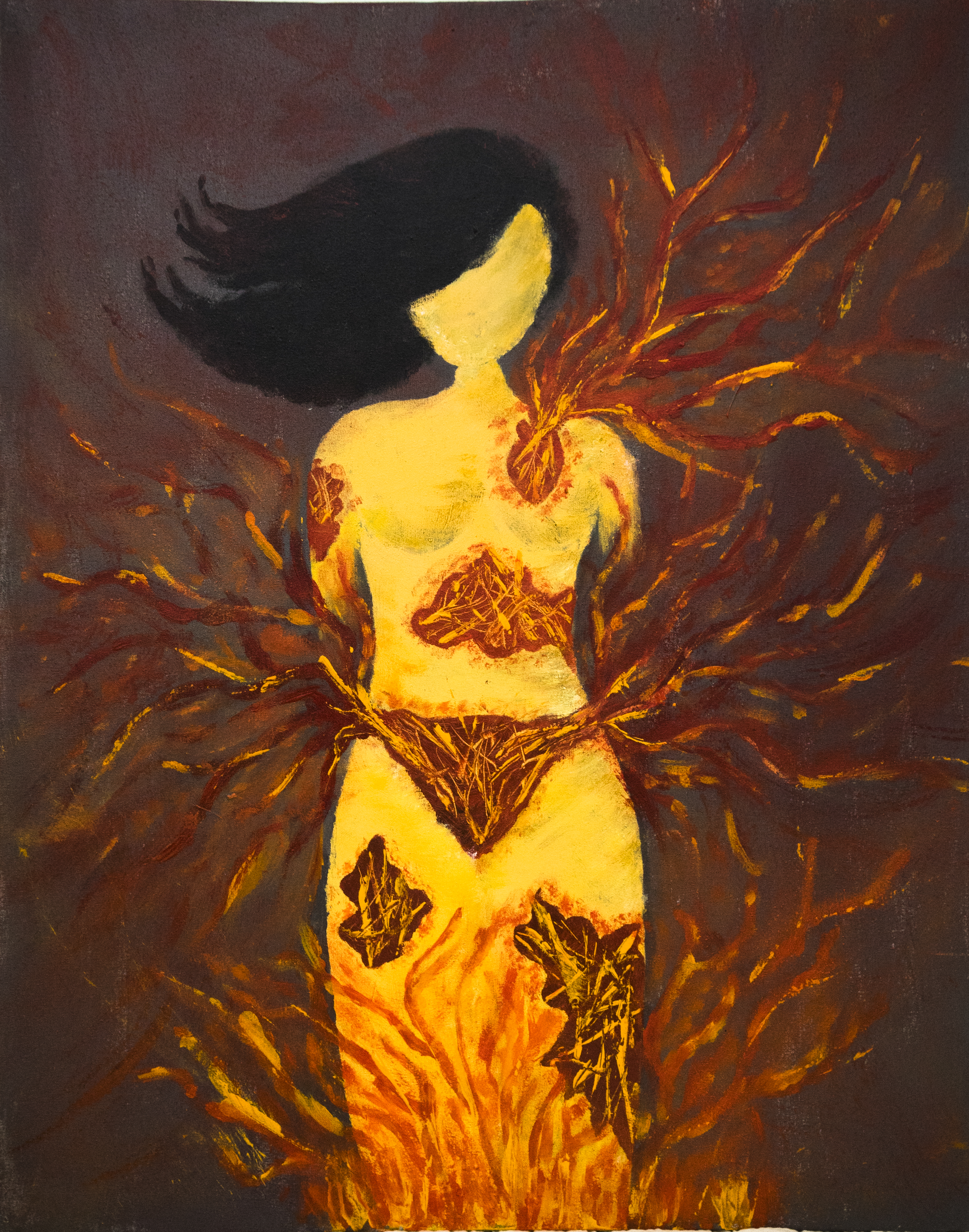 Standing in front of a row of five paintings, four of them featuring a woman while the other one was a canvas of eyes, Phaving Phung beamed with pride.

The theme of her exhibition at a pub in Phnom Penh was “Female Embodiment”.

A teacher, self-taught artist and  self-proclaimed feminist, Phung began painting in late 2017. Since then she has painted a series of paintings, covering many themes related to human experience, particularly feminism. 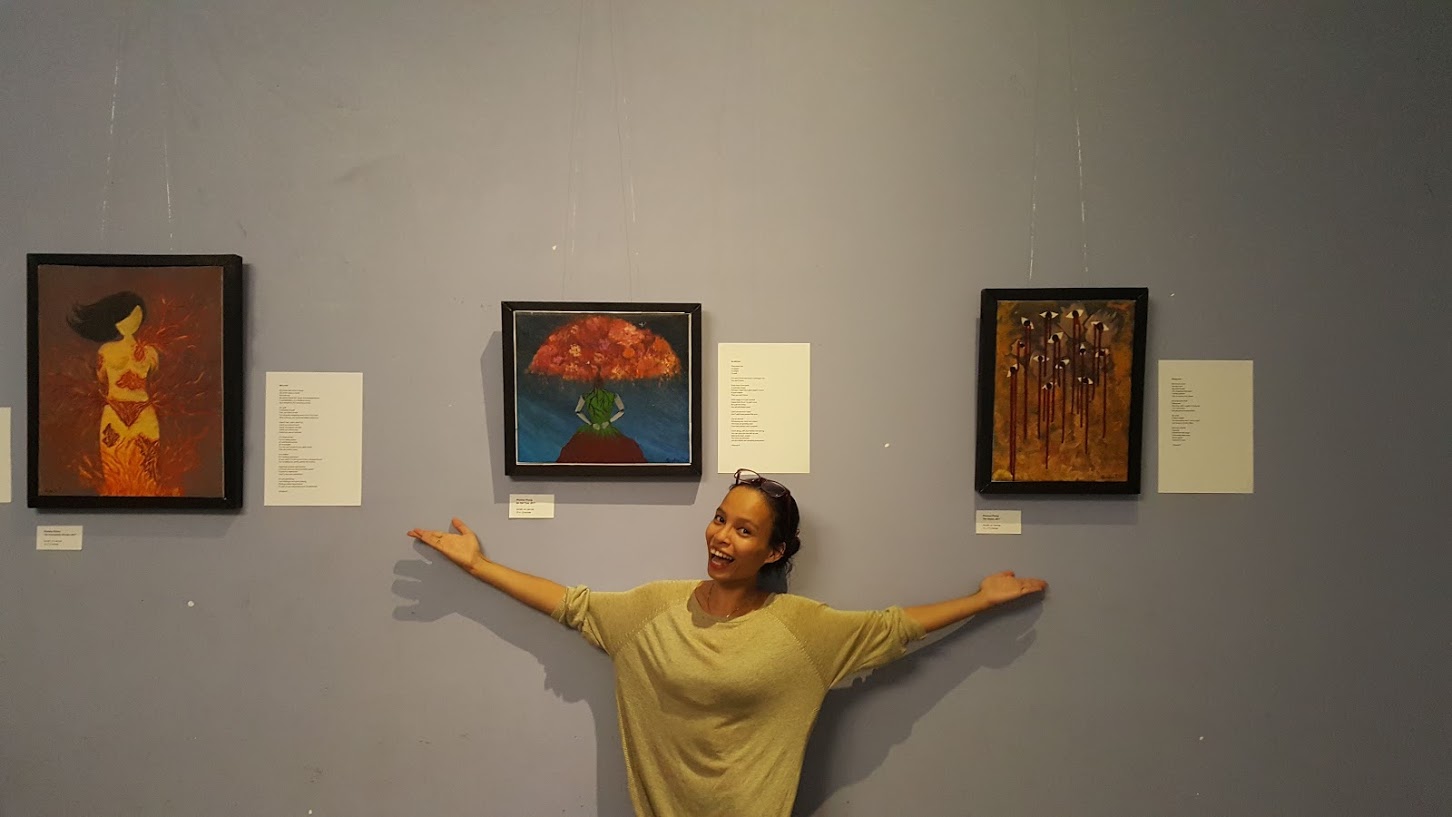 Inspired by Paul Gauguin and Frida Kahlo, she uses striking colors to capture emotions and translate them onto the canvas. Because of the emphasis on personal experience and emotions, she finds that painting can be difficult.

“Some of the paintings were painted when I was processing deep-seated anger,” she explains.“While it offered relief afterward it was also very exhausting.”

Like many children, Phung was fascinated by drawing and coloring. However, she did not think that she was talented and never thought of pursuing a career in art. This changed when she found it difficult to channel her emotions.

“Over the past year, I went through quite a tough time, in terms of my relationship with my loved ones, my struggle to exist as I am in this patriarchal society. Those were heavy feelings. I talked to people about that and quickly realized that words are simply limited.” 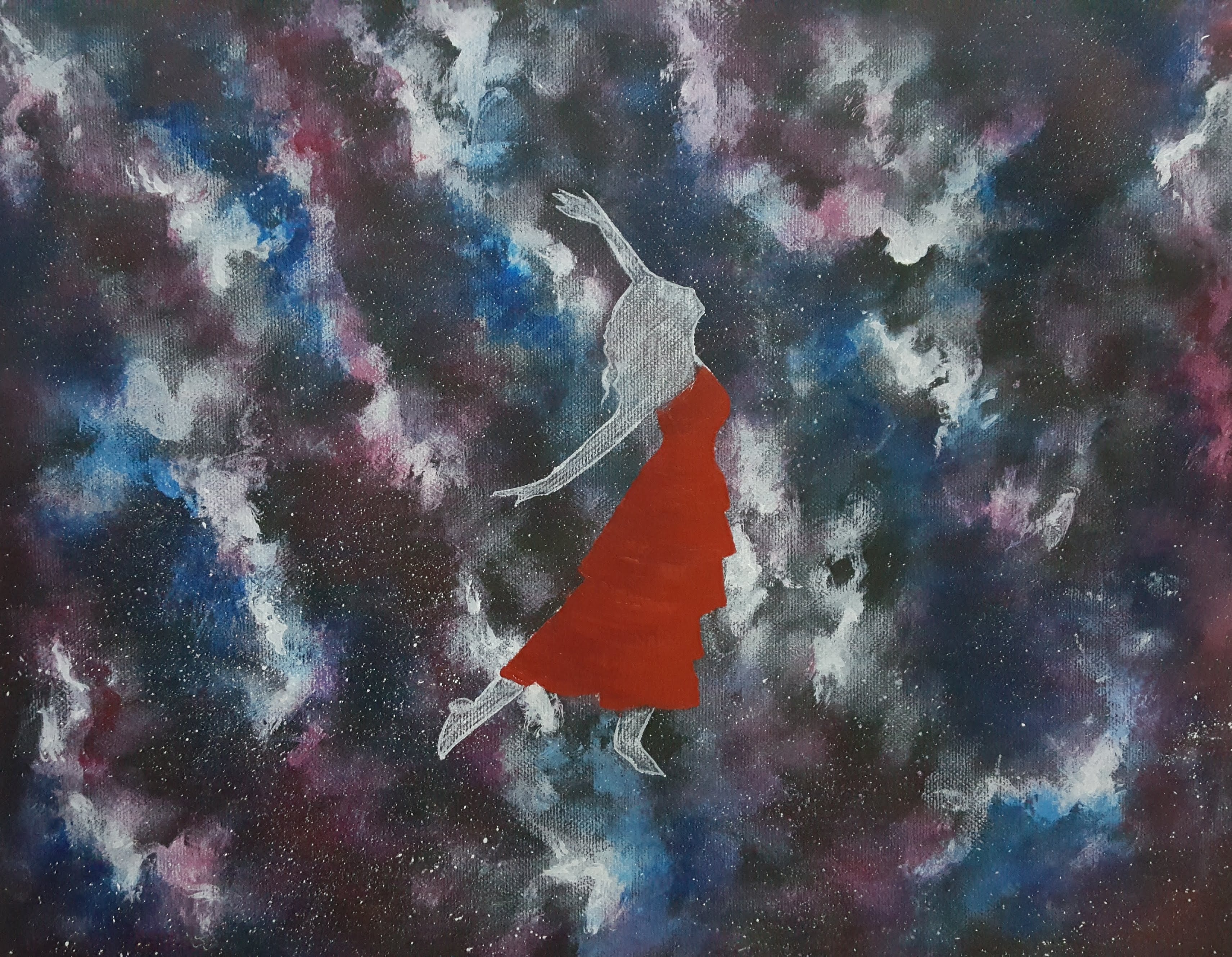 “To confine human experience and emotion to words can be difficult sometimes. So I turned to painting. I initially paint to process my emotions; it’s an outlet for whatever is inside you to flow and take shape on a canvas.”

Phung also hopes to inspire the new generation (two thirds of Cambodia’s population are under the age of 30) not only to pursue an artistic career but to take up activism and feminism, which has not yet really taken hold of Cambodia.

“It doesn’t just have to be about feminism. You can use arts to address many other sociological problems as well. I don’t know if my exhibition has inspired others or not but I think others, particularly women, may be able to relate to the theme.” 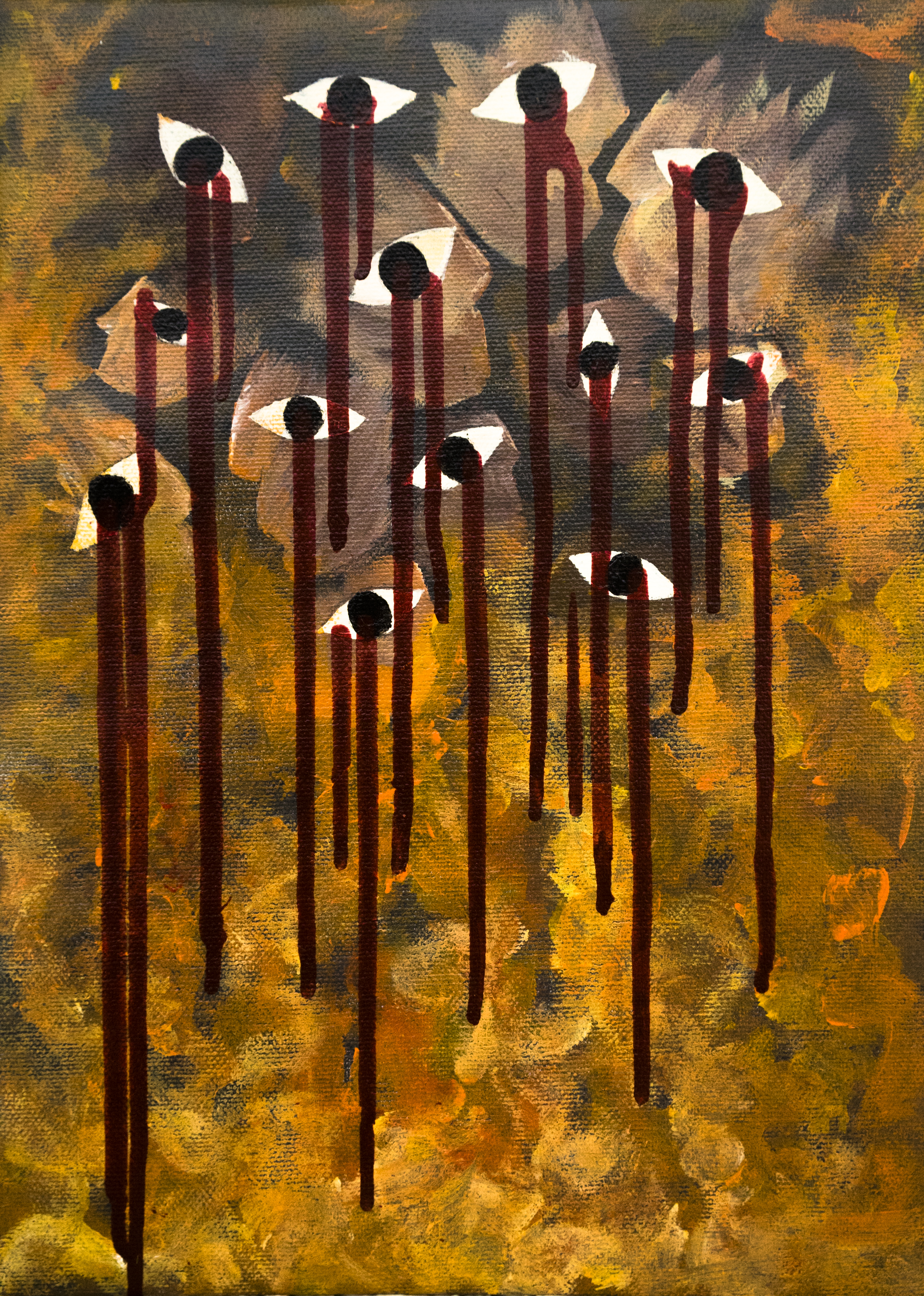 “’Female Embodiment’ examines the cultural ideals that are imposed on the female body. In this society, women are still struggling for autonomy over their own bodies. In certain parts of the world, women are still fighting for abortion rights.”

The debate about female bodies is ongoing all over the world – who ultimately decides what a woman does with her body?

“A woman’s body is a place where decisions are made for her, whether she should have children, look a certain way, etc. But Female Embodiment is more than just bringing to the surface the inequality that women experience; it’s about the act of reclaiming back our bodies, to free our suppressed emotions and to live fully as human. It’s about a call for unity and an alliance to fight patriarchy.” 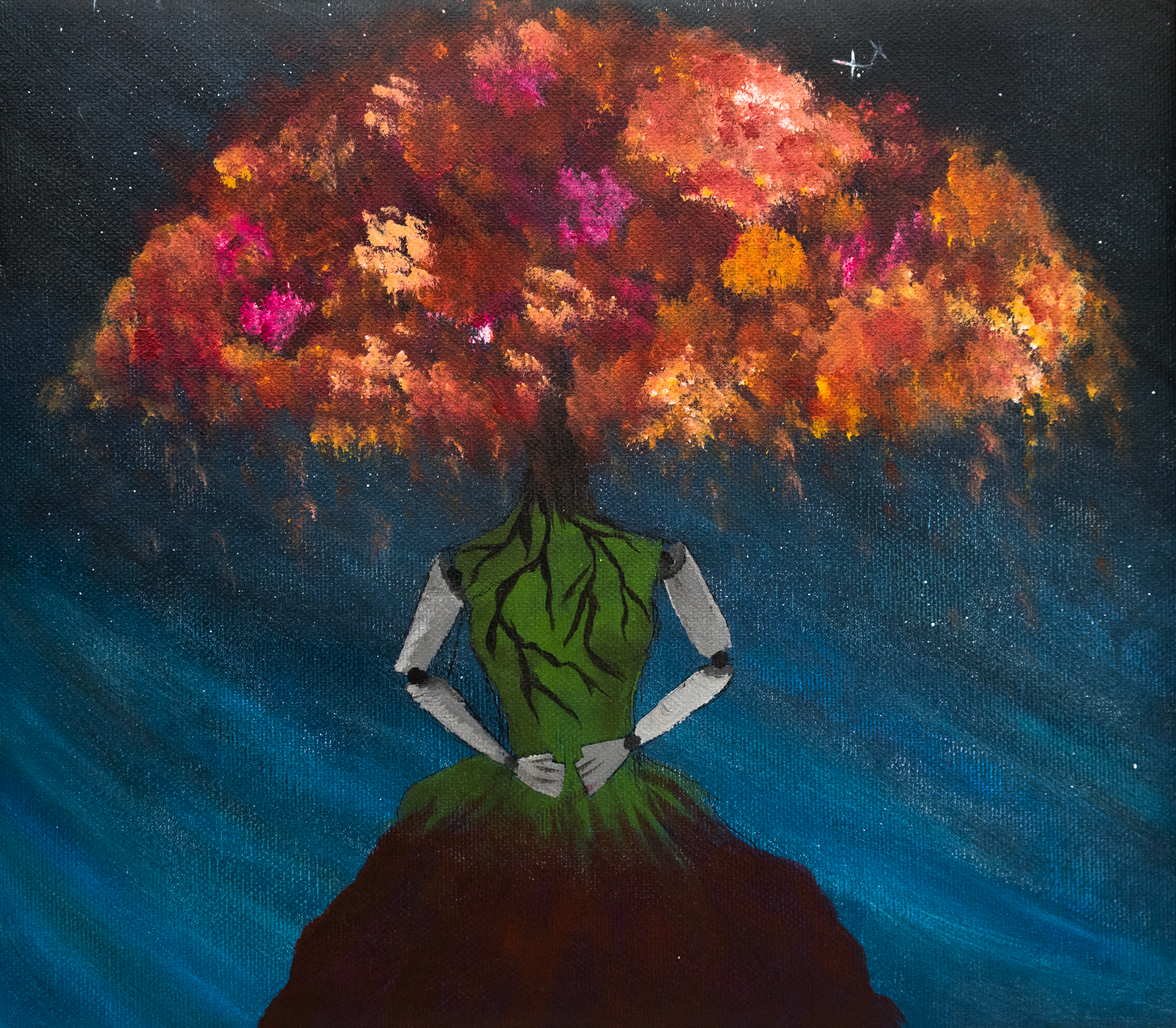 Gesturing to a peculiar painting of a woman portrayed as a tree with robotic limbs, which Phung named “An Old Tree”, she said it was one her favorites. She said that it depicted deep-seated ideas and traditions that society plants in women.

She said that she had tried to “unlearn what she had learned” by painting the woman in the piece.

Describing her painting process as a “cathartic experience”, she explained that she had channeled rage in another favorite of hers called “The Gaze”, a canvas full of eyes that came to life as she was trying to process her experience of harassment. 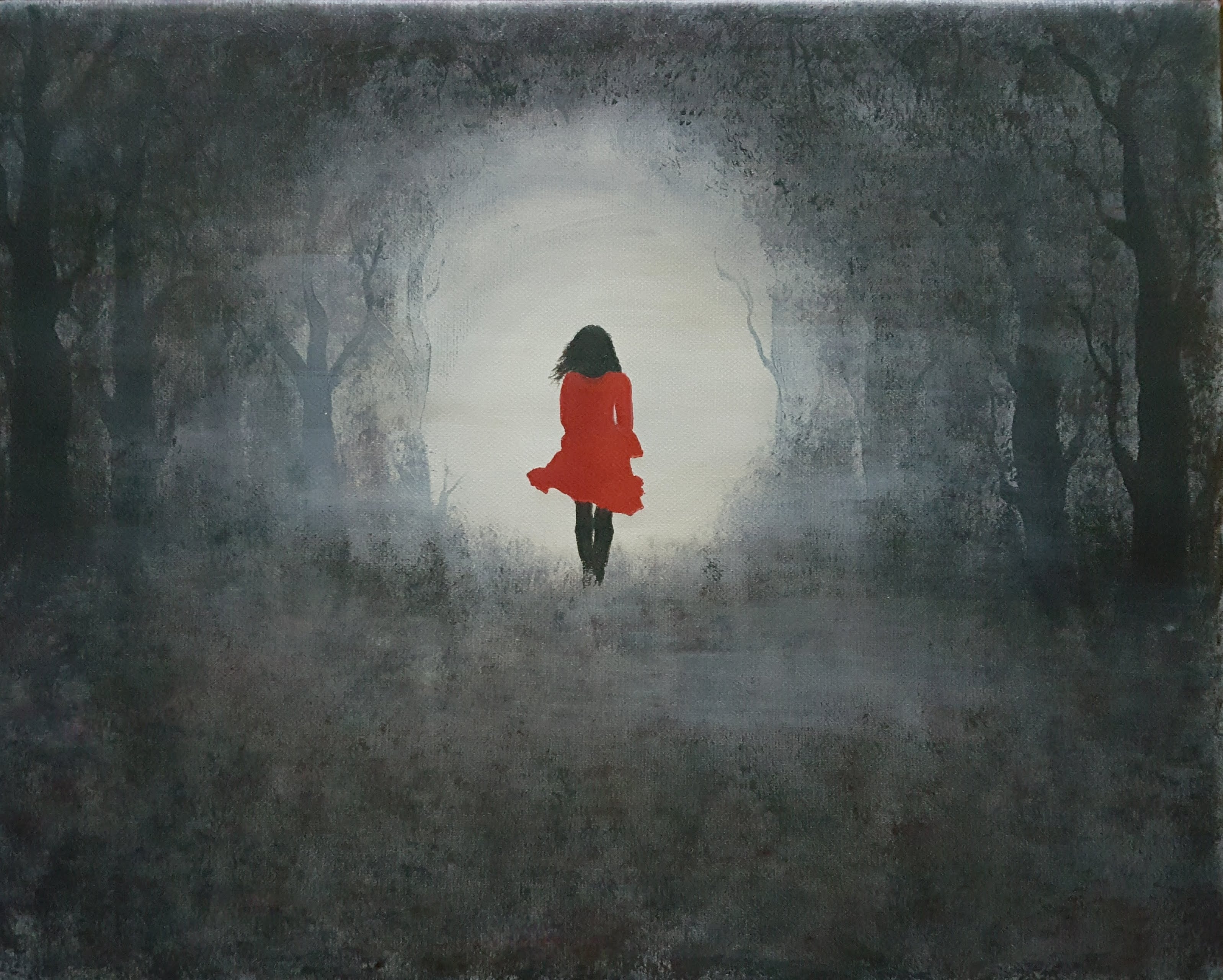 Finally, she quoted Frida Kahlo as saying: “I paint my own reality. The only thing I know is that I paint because I need to, and I paint whatever passes through my head without any other consideration.”