Shobha Somappa Tarvgol, 18, sits in her one-roomed home in Modhur, India. Shobha became a Devadasi sex worker because there are no men in her family and she had little other means of supporting her sister, sick mother and grandmother.

Young girls in south India continue to be “dedicated” to village temples and then forced into prostitution despite laws banning the ancient ritual, researchers said.

The devadasi system, which involves putting a beaded necklace around girls and often leads to a life of sex work and slavery, goes unchecked in Karnataka state, according to two reports released this month.

Laws banning the practice are poorly implemented and the rituals are now being done undercover, said the devadasi reports, published by the National Law School of India University and the Tata Institute of Social Sciences.

“It is like an open secret,” said Bincy Wilson, a researcher at the law school in Bengaluru and co-author of one of the reports.

“The entire community knows when a girl has been dedicated but it is not seen as a crime but more as a social problem that continues to accepted as part of the culture.”

The practice of dedicating young girls to the service of a deity began in ancient India, but over time the custom degenerated into an excuse for their sexual exploitation by men. 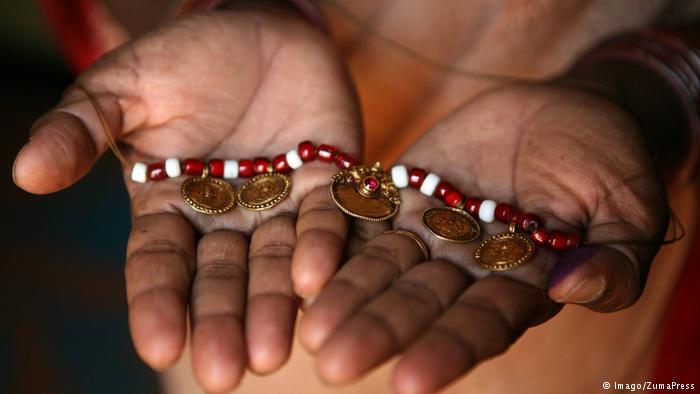 Vimala Madar, 40, holds her muttu , the red and white beaded necklace tied around her neck during the dedication ceremony performed on her when she was ten years old to convert her into a Devadasi.

Karnataka banned the practice in 1982, calling it a “social evil” that led women to prostitution.

Data on the current number of devadasis is difficult to find but in 2007-2008 the government estimated that there were 46,660 living across 14 districts in Karnataka.

“We are dedicated to ending this crime and will look into the concerns raised in the two reports,” said C Vasundhara Devi, a Karnataka official responsible for stopping the rituals.

“We are running many schemes to help families of former devadasis to ensure the tradition does not continue.”

There were only two cases of girls being pushed into the ritual last year, said Devi, adding that stopping secret dedications was a bigger challenge.

The practice was traditionally a public event accompanied by festivities, where the girl was dressed up as a bride. A devadasi dedicated her puberty to a deity, lived in the temple and even learnt classical Indian dances to perform for the gods.

Since the ban, the tradition now takes place in homes, followed by a small ritual at a temple at night, said Sharon Menezes, co-author of one of the studies.

The girls involved are usually from the lower-caste Dalit community, have little or no land, and live in drought-prone areas, one report said.

“Anybody resisting the practice immediately stands out in the community and is singled out, which is why it continues,” said Menezes.

“All the women we interviewed during the research talked about being in pain and their inability to resist the dedication or abuse. It is clearly not a system they have accepted.”