Alex Megos: “Climbing is my way to live my dream” 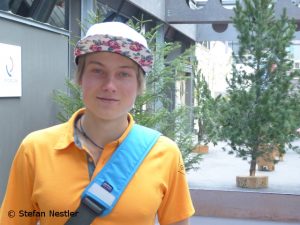 Alex Megos at the IMS in Brixen

There are people who seem to be able to override the law of gravity. Alex Megos is one of them. The 25-year-old German from the city of Erlangen is one of the best sports climbers in the world. At the age of 19, he was the first in the world to master onsight a route in the Spanish climbing area of Siurana in French grade 9a, which corresponds to eleventh grade according to the classic UIAA difficulty scale. For comparison: Reinhold Messner climbed the seventh degree in his best days. Onsight means that Alex simply climbed straight on without having got any information about the route beforehand. This coup opened the door to professional climbing for him. This spring, Megos added another highlight: He managed the first ascent of the route “Perfecto Mundo” in the climbing area Margalef in the northeast of Spain (see video below showing one of his failed attempts), his first 9b+ (according to UIAA scale a climb in the lower twelfth degree). A single route worldwide is currently considered even more difficult.

I met Alex Megos during the 10th International Mountain Summit (IMS) in Brixen, South Tyrol, where the big names of the mountain scene have been passing the mike to each other for years.

Alex, you are one of only three climbers in the world who have climbed a route with difficulty level 9b+. So you’re right at the front of the pack. How does that feel?

END_OF_DOCUMENT_TOKEN_TO_BE_REPLACED

Actually, it is recommended to use superlatives only with caution. But it’s undisputed that Chris Sharma has been one of the best rock climbers in the world for many years. The 35-year-old American and the 24-year-old Czech Adam Ondra have so far been the only climbers who have mastered a 9b+ route (on the French grading system) – partly extremely overhanging, actually impossible to climb. Currently the measure of all things. Chris is living with his wife Jimena Alarcon and the little daughter Alana in Barcelona.

Chris, you have been climbing at the highest level for so many years.. Do you think that you one day  get tired of doing it?