Arundhati Roy: ‘We’re up against a fascist regime in India’ 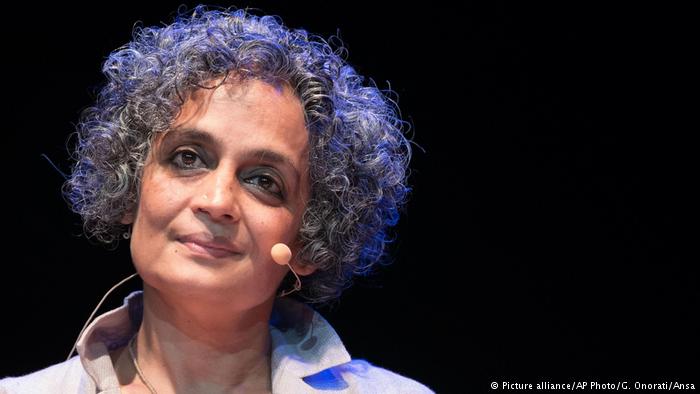 In an interview with DW, renowned novelist and social activist Arundhati Roy talks about the recent arrests of leftist intellectuals in India, accusing PM Modi’s government of “overturning” the country’s constitution.

The authorities are investigating violence between low-caste Dalits and upper-caste Hindu groups following a political meeting in the western city of Pune on December 31 last year. The Press Trust of India (PTI) news agency said the five activists were detained in connection with that meeting.

“These persons have been arrested for their Maoist links,” Shivaji Bodakhe, joint commissioner of Pune police, told AFP news agency.

Local media reported that police also raided homes of other prominent anti-government activists on August 28. Five other people were detained in June.

Rights organizations said that the arrest of five prominent activists is part of the ruling Hindu nationalist Bharatiya Janata Party’s (BJP) campaign to silence critics ahead of next year’s general election.

In an interview with DW, Arundhati Roy, winner of the 1997 Man Booker Prize for fiction, said that Prime Minister Narendra Modi’s government is systematically targeting its opponents, free thinkers and members of the minority groups.

DW: The recent arrests of anti-government activists have sparked outrage in India. How would you describe the government’s action?

Arundhati Roy: Thousands of people are in jails across the states of Jharkhand, Chhattisgarh and Andhra Pradesh. These are the people who don’t have names, who don’t have lawyers, who can’t hold press conferences.

Earlier, the “Adivasi” (indigenous) community was labeled “Maoists;” now the Dalits (lower caste Hindus), and anyone who supports them, are being included in this category. We’re witnessing a coup against the constitution. It is a very dire situation.

Some analysts and political activists say that the recent government crackdown is reminiscent of former PM Indira Gandhi’s declaration of emergency in 1975. Do you agree with the view?

I think it is potentially more dangerous than the 1975 emergency. The 1975 emergency was supposedly declared to implement the constitution, although it was a violation of the peoples’ rights. But this government is trying to overturn the constitution in order declare India a “Hindu rashtra” (Hindu nation) — more significantly an upper-caste Hindu rashtra, in which the minorities and all those who do not agree with the majoritarian point — can be criminalized.

I think it is going to be a continuous circus until the general election [next year] — arrests, assassinations, lynchings, bomb attacks, riots and pogroms.

Some experts have pointed to similarities when it comes to recent killings of several liberal activists. Who could be behind these apparently systematic attacks?

The investigation by the Karnataka police into the assassination of the journalist and activist Gauri Lankesh has led to several arrests, which have in turn led to the unveiling of the activities of several right-wing Hindutva (Hindu supremacists) organizations like the Sanathan Sansthan.

What has emerged is the existence of a shadowy, full-blown terror network, with hit-lists, hide-outs and safe-houses, flush with arms, ammunition and plans to bomb, kill and poison people.

At the same time, I feel that the authorities can derail everything easily — with some major or even minor attacks that are amplified by pet media houses. The recent arrests are an attempt to divert attention from the real threat, I believe.

Is PM Narendra Modi losing his popularity as a result of these actions?

It has been important for governments — both the former Congress-led United Progressive Alliance and the incumbent Bharatiya Janata Party (BJP) — to disguise their attacks on Adivasis, and now, in the case of the BJP, their attack on Dalits, as an assault on “Maoists” or “Naxals.” This is because, unlike in the case of Muslims who have been almost erased from electoral arithmetic, all political parties have an eye on Adivasi and Dalit constituencies as potential vote banks. By arresting activists and calling them “Maoists,” the BJP government manages to undermine and insult Dalit aspiration by giving it another name — while at the same time appearing to be sensitive to “Dalit issues.”

There are thousands of people in jails across the country; poor and disadvantaged people fighting for their homes, for their lands, for their dignity. These people have been accused of sedition and worse, languishing without trial in crowded prisons.

We are up against a regime that its own police calls fascist. In the India of today, it is a crime to belong to a minority. To be poor is a crime. To defend the poor is to plot to overthrow the government.

The vulnerable in India are being cordoned off and silenced. The vociferous are being incarcerated. God help us to get our country back.

Arundhati Roy is an internationally acclaimed Indian author, best known for her first novel “The God of Small Things,” which won the 1997 Man Booker Prize. Roy also writes political essays and has been advocating the rights of minority groups in India and beyond.