Deepa (who only has one name) is sitting desolate in the corner of the busy Thane railway station in Mumbai. She looks exhausted, weary and frightened after a long train journey that lasted 8 hours …

With just a small bag containing a few personal belongings and an empty water bottle, the 14-year old looks around stealthily to see if there are any policemen around. 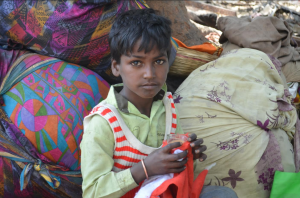 It takes a while for her to open up as she is very shaky. Then, she reveals why in a murmur: “My stepmother hit me badly and I could not take it anymore. She always treated me badly did not like my playing with my friends. So I ran away. I am scared.”

She does not know if she’ll return and could well end up like the thousands of children in India who wander around railway stations, sleep in isolated corners or work in shops to pay for their next meal.

India’s big cities, particularly the commercial capital Mumbai, lure children from rural areas who hope to escape domestic abuse, a cruel stepmother, the humiliation of failing their exams or are simply attracted to the glitter and glamor.

Some 20 kilometers away, at another railway station in Kalyan, 16-year-old Papita is busy playing hopscotch with her friends on the edge of a platform. 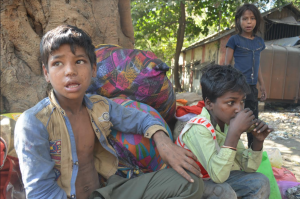 She ran away from the city of Pune, some 150 kms away, and the platform has been her home for three months already. She earns a livelihood by picking up trash and selling it to scrap dealers.

“There is no food at home. I usually survive by begging or performing menial work. If there is no work, there is no food. My friends and I share food. It is a tough life. If we make money, all of us have a small feast.”

According to police figures, a child goes missing every eight minutes in India. Every day, according to official figures around 200 children arrive in Mumbai by train from all over the country. The unofficial count is much higher.

These statistics are sombre, heart-breaking.

Lack of care and protection makes these runaway children susceptible to sexual or physical abuse at the hands of older children, adults or gangs that prey on them. Children are often trafficked or forced into bonded labor. Girls are particularly vulnerable and sometimes are kidnapped within hours of arriving in a city. 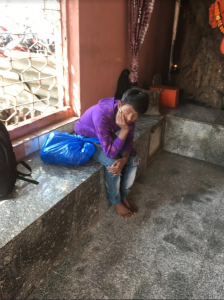 The 15-year-old Shardul also ran away from home but escaped this fate. “I was almost taken by some men from the station. But I ran for my life and some people noticed my shouting. Luckily, some volunteers from an NGO took me under their wing,” she says. Today, she is hoping to go home after six months living in a shelter.

Runaway and homeless children are also prone to falling victim to addiction. The distress of leaving home in adverse circumstances make many turn to drugs. Many sniff boot polish or whiteners to get high.

The latest National Crime Records Bureau data shows that underage girls are twice as likely to go missing as boys. In 2016, over 22,000 underage boys went missing while 41,000 girls did.

Many children who run away remain untraced, swallowed up by the underworld of child trafficking, sex tourism and pornography.