Women press ahead with change in Iran

Forty years ago, Ayatollah Khomeini founded the Islamic Republic of Iran. There is little excitement left from those times; even pro-reform forces are exhausted, except for the women among them.

Sadegh Zibakalam is not expecting much from the 40th anniversary of the Islamic Revolution. “On the anniversary, politicians will hold speeches again. They will talk about exporting the Islamic Revolution, about the destruction of Israel and the war against the US. But what almost never appears in their speeches are the true aims of the revolution 40 years ago,” the political scientist from Tehran told DW. “The revolution promised us democracy, the rule of law and freedom of the press. It promised us the right to freedom of opinion, without being arrested and tortured.”

As a young student, Zibakalam had supported the revolution. During the regime of the Shah, he had spent two years in prison, but he is also aware of the repression taking place in Iran today. A winner of DW’s Freedom of Speech Award in 2018, he was, at first instance, sentenced to prison for 18 months. The reason: In an interview with DW, he had shown sympathy for the protesters in Iran. From December 2017 to January 2018, the country witnessed the biggest anti-government protests in a decade. 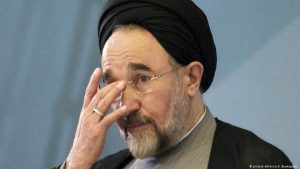 Mohammed Khatami won the presidential elections in 1997 with his reform agenda, including cultural freedoms, rights for women and minorities

The Islamic republic — then and now

Among other things, Zibakalam said that many citizens in the country had expressed “wishes and demands that had been pent up for a long time” and had vented their “disappointment about the entire system.” In fact, there was even occasional praise for the former Shah Reza Pehlavi, who was overthrown by the revolution in 1979. At most, 30 percent of Iran’s citizens still believe in the Islamic republic, the political scientist said.

Things were different 40 years ago: At the time, 98 percent of Iranians had, through a referendum, agreed to the future reform of the state and declaration of an Islamic republic. Even if this number was “surely wrong,” German diplomats at the time reported that there was no doubt about the overwhelming support for Khomeini as the leader of the revolution and the country.

In this manner, he was able to implement the system of “guardianship or governance of the Islamic jurist,” as the core element of Iran’s constitution against the competing ideas of moderate and leftist forces. This was possible because of Khomeini’s popularity, but very soon, the “proven” methods of suppressing the free press and outfits like Hezbollah started rearing their heads.

After the heavy losses following the war with Iraq (1980-1988), the “system” (Nezam in Persian, based on conservative clerics and revolutionary guards) was able to consolidate its power. Nevertheless, there were phases when reform-oriented and liberal currents could assert themselves, but without resulting in any sustainable changes.

This phase is linked with Mohammed Khatami, who won the presidential elections in 1997 with his reform agenda, including cultural freedoms and rights for women and minorities. But the system reacted immediately. Student protests against the closure of a newspaper in summer 1999 were brutally repressed, but carried on nevertheless, leading to the arrest of hundreds of students, death penalties — albeit not carried out — and forced confessions about cooperating with foreign powers. The press was massively restricted, liberal intellectuals were arrested, including the future Nobel Peace Prize laureate Shirin Ebadi.

The second big upturn for democratic forces manifested itself in protests against the apparently falsified presidential elections of July 12, 2009. The ruling clique was determined to enforce the re-election of then President Mahmud Ahmedinejad against the looming victory of the opposition candidate, Hossein Mussawi. After the announcement of the results — declaring an unbelievable 63 percent of the votes for the incumbent — hundreds of thousands of people took to the streets in protest. The demonstrations of this “green movement” took place sporadically until November of the following year, before they were totally quelled by the security apparatus, including the Revolutionary Guards — loyal allies of those who profited from the system. 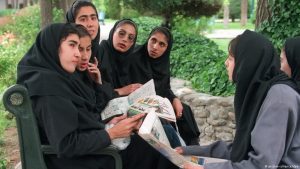 No hope for change?

The British-Iranian historian Michael Axworthy writes that the country — after the elections of 2009 and the defeat of the green movement — was looking more and more like a military dictatorship, a tighter and more effective version of what the revolution had brought down in 1979.

Is there no hope for change then? It could come from Iranian women. “An important part of these protests (of 2009) came from women, as it has for the last 150 years,” activist Mansoureh Shojaee told DW. She was referring to the long history of the women’s movement in Iran, which began even before the constitutional revolution of 1906.

The Islamic Revolution did not take away the voting rights of women, but because the state is led by religious scholars, women are automatically at a disadvantage in the political arena. Even in the family, according to Shariah rules, all important decisions are taken by fathers or husbands. In order to keep their autonomy as adults, women in Iran often have to deal with their husbands. Thus, after the marriage, the husband decides whether his wife will work. He also determines where the family will live and whether his wife can leave the country or even the city.

That is one side of the story. The other side is the unparalleled educational success of women in Iran: they represent a disproportionate number of university graduates and are strongly present in public sector jobs compared to other Islamic countries.

“The social change to a more urbanized, highly educated society in which women play a much more assertive role is of huge significance, and is bound to change politics in Iran too in the medium to long term,” wrote Iran expert Axworthy.

According to Mansoureh Shojaee, “Especially in the last 10 years, women have used every opportunity to make their demands clear: even in prison. Under President Ahmedinejad, arrested women did not need to wear a chador — the full-body veil in Iran — in prison anymore. Previously they were required to wear it even in court. This was brought about by the human rights lawyer Nasrin Sotoudeh, who went on a hunger strike in prison.” 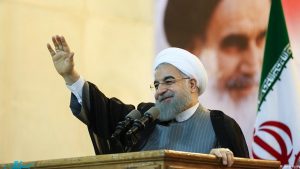 Sotoudeh, who received the European Union’s Sakharov Prize, was arrested again in 2018 on charges of espionage and for supporting anti-veil protests, and is now in prison. She and several other women’s activists have always emphasized that they believe in change through peaceful means, Shojaee said.  But it’s much more than freedom from clothing diktats. “The women’s movement in Iran is trying to renew itself. It is trying to address civil rights and make a connection with the general demands of society in order to motivate the larger public for change,” she told DW.

Rouhani’s era: to what end?

The election of the ostensibly reform-oriented President Hassan Rouhani in 2013 has so far not brought any changes in the eyes of women and liberals in Iran; and for the daily problems of the people who suffer under economic deprivation, there is no change. “If a political system does not find a way to reform itself and agree to the demands of its citizens, it will sooner or later lead to a serious crisis, to a revolution or a breakdown,” Abbas Abdi, who stormed the US Embassy in 1979 and later became a critic of the regime, told DW.