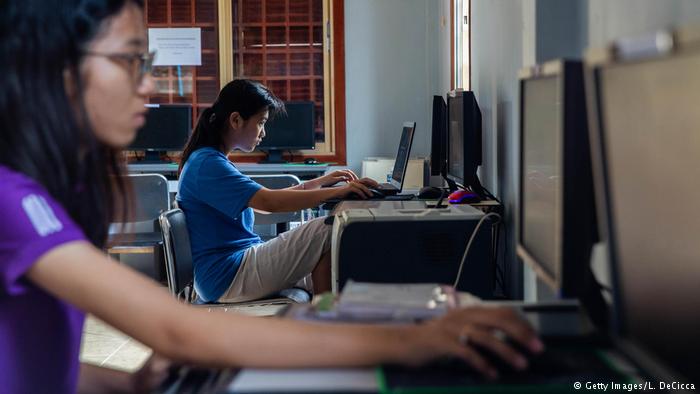 The Cambodian government has begun an initiative aimed at encouraging young women to study science and technology. The goal is for more women to become the future leaders in the country’s growing IT sector.

The founder culture of tech startups around the world continues to be dominated by men, and one recent study of over 40,000 global companies found that only 17 percent were founded by women. Hurdles to startups run by women include lack of venture capital and less networking opportunities.

In Cambodia, the tech sector is growing rapidly, but traditional gender barriers are preventing young women from taking advantage of opportunities to participate in the future of the Southeast Asian nation’s tech industry.

Technovation is a global technology entrepreneurship program, which encourages girls between 10 and 18 years old to develop skills they need to emerge as tech entrepreneurs and leaders. It also aims to raise their interest in science, technology, engineering and mathematics. The program encourages girls to engage in their communities and come up with technological solutions to resolve problems.

In Cambodia, the initiative was launched in 2014, organized by USAID in partnership with Cambodia’s education ministry, NGOs and the private sector.

Heang Oumuoy, Technovation’s ambassador for Cambodia, told DW that the program aims to increase the number of women in technology-driven sectors and equip young girls with entrepreneurial knowledge. “In 2017, one of the 23 Cambodian teams advanced to the final stage of Technovation’s international competition. They beat 1,100 teams, and approximately 5,000 girls, from all over the world,” said Oumuoy.

Teams participating in the program consist of two to five girls each. During the 12-week training period, each team is assisted by a technical coach and a business mentor. At the end of their training, they present their technology and business plans. A panel of judges then assesses their viability.

This year, the program has expanded to more Cambodian provinces, involving 200 young girls from 12 public and 10 private schools.

Bellatrix, a Cambodian team, was one of the three semifinalists in the Technovation global entrepreneurship 2018 program, in which over 2,500 teams from more than 115 countries participated.

When questioned about how the team came up with this idea, Tin Sokmuni from Bellatrix told DW that she wanted to help foreigners living in Cambodia.

“We wanted to put technology to use by enabling foreigners to be able to learn Khmer on their phones without the need for tutors,” said Sokmuni. “Now that I have accustomed myself with some technological know-how, I find it increasingly interesting. I want to keep learning it,” Sokmuni added.

Meas Mony, a mentor for Bellatrix, told DW that his former boss suggested that he become a volunteer mentor for Technovation Cambodia 2018.

“The girls’ curiosity and willingness to learn about technology have motivated me to continue to mentor them,” Mony said, adding that he sees a lot of potential in the girls.

Still, observers say Cambodian girls confront many problems when they seek to set up digital businesses. According to a study published by USAID in June, only 8.5 percent of female students in Cambodia register for Information Technology-related programs at university.

In March, the nation’s telecommunications ministry launched the Cambodian Women in Technology Award to encourage more women to enter the technology industry. The awards are given to women who are actively contributing to the development of Cambodia’s technological sectors.

“Women are considered ‘weak’ in Cambodia. These programs give them a chance to prove their skills and talents to the world — to show that women can also be influential in technology and business,” Sokmuni said.