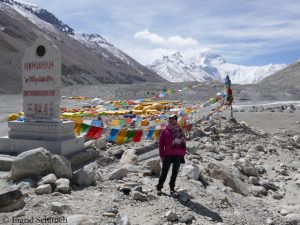 Another thing Ingrid and Susanne have in common is that both mountaineers are already beyond the age of 60. Aged 63, Schittich is now the oldest German woman ever to reach the summit of the world’s highest mountain, 61-year-old Müller-Zantop the second oldest. In any case the circle is rather exclusive. Before the spring season 2018, only nine other German women had scaled Everest – most of them much younger than Ingrid and Susanne. They are also expected to be at the top of the age pyramid of Everest female climbers across Europe (data for spring 2018 have not yet been published). The world’s oldest woman on Everest to date was the 73-year-old Japanese Tamae Watanabe in 2012. 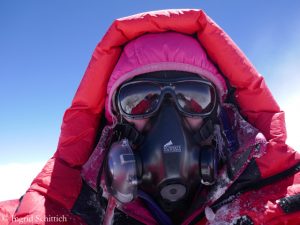 She wanted to prove “that even at an advanced age you can still achieve high physical performance,” says Ingrid Schittich, who began to climb genuinely only at the age of 49. It was already her third attempt on the north side of Everest: In 2016 she had had to turn around at 7,000 meters, in 2017 at 7,650 meters. Both times she had felt bad. With her summit success this spring, the 63-year-old completed her collection of the “Seven Summits”, the highest mountains of all continents.

“During the ascent I only thought of the effort. Thoughts came up like I’ll never do that again,” recalls the physician from Munich. “On the summit I was happy and felt a deep satisfaction that I had achieved my goal.” Ingrid really enjoyed the moment, because she and her four companions from the team of the Swiss expedition operator “Kobler & Partner” were en route on the Northeast Ridge “without traffic jams or obstruction by other climbers. Also on the summit we were alone.”

Poster for cosmetics on the summit 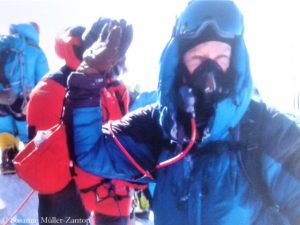 15 minutes on the top

Susanne Müller-Zantop had also dreamt to experience the moment on the highest point of the world this way. But things turned out very differently. “I was happy and undisturbed during my ascent, I only met a few people,” says the German entrepreneur, who lives in Zurich in Switzerland. “The summit was a shock, first I stared at a poster for Chinese women’s cosmetics. There was hardly any place, it was so crowded. My Sherpa pulled a Lama’s coat, sword and cap out of his backpack, quickly put everything on and filmed himself. I was disappointed, there was no opportunity for rest, enjoying the panorama or even devotion.” After a quarter of an hour Susanne fled from this “marketing platform,” as she calls it. 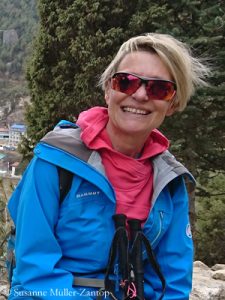 Like Ingrid Schittich, Müller-Zantop was a late comer in terms of high altitude. In 2016 she scaled Cho Oyu. “I didn’t discover the eight-thousander world until I was 60,” says Susanne. “Maybe I’m just ready for it now. I think I’m mentally super strong now, much stronger than before.” She also had no problems with her fitness on Everest. “I don’t think that you necessarily lose your strength while getting older. Maybe I am even physically stronger and fitter than before.”

The experiences on Everest are still having an effect on both climbers. “You find everything there: living legends, young guns, adventure addicts, record addicts, people who search for meaning and tourists like me,” says Susanne Müller-Zantop. “I take with me many pictures and the gratitude that I belong to the privileged ones who were allowed to stand on the highest point on earth. I also take along that I can deal even better with my fears than before. And I was really scared on the way.”