Nancy Hansen (r.) and Ralf Dujmovits at the DLR

“We were the mice for five weeks,” says Nancy Hansen describing the time she and Ralf Dujmovits – as reported – spent in a hypoxia chamber at the German Aerospace Center (DLR) in Cologne half a year ago. The goal of the study was to find out whether, under certain circumstances, extreme hypoxia can lead to a strengthening of the heart in humans – as previously found out in two experiments with mice in the USA. After an acclimatization phase of around two weeks, the climbers had spent 16 days at a simulated altitude of 6,700 meters or higher, including four days at an oxygen content of only eight percent, which corresponds to 7,112 meters. “I suffered quite a lot,” admits Nancy. “But it was a big privilege to be part of the study.” Ralf is also still impressed by the experience: “I was hard on the edge. To be honest, I wouldn’t do it again. I underestimated the whole thing.” Last week the couple was in Cologne again – for one of several follow-up examinations. The first preliminary results of the study are now available. Extreme hypoxia initially had different effects on the bodies of Nancy and Ralf. Ralf, due to his many expeditions to eight-thousanders apparently better accustomed to the lack of oxygen, acclimatized much easier than Nancy. “One of the DLR doctors told me: ‘I hope you feel better than you look’,” she remembers and smiles. Once, the 50-year-old Canadian had an oxygen saturation of only 56 percent, a hospital patient would have been a case for intensive care. A DLR team was on duty around the clock for the two climbers. The scientists took blood and urine samples, carried out ultrasound and MRI examinations or cognitive tests. The analysis of the huge amount of data from the various tests is far from complete.

Both climbers lost muscle mass, they slept worse. It was astonishing that Nancy’s and Ralf’s responsiveness and concentration ability remained almost constant, even under extreme hypoxia. “However with the restriction that they were really challenged by the cognitive tests and had to concentrate,” says Dr. Ulrich Limper, who led the DLR study together with Prof. Jens Tank. During normal conversation, some “dropouts” were noticed.

In Nancy’s heart, the right ventricle swelled and the pumping capacity decreased. In her brain, minor so called “White Matter Lesions” occured, which are frequently found in elderly people. In Ralf’s brain, the veins swelled over time without the 57-year-old suffering from severe headaches. In addition, the kidneys of both climbers worked much worse under hypoxia – albeit still sufficiently. “The good news is that all symptoms disappeared within 30 hours after Nancy and Ralf had left the hypoxia chamber and breathed normal air again,” says Dr. Fabian Hofmann, one of the DLR doctors.

It is not yet possible to say whether a damaged human heart is positively influenced by extreme hypoxia, as found out in the mice experiment. “We were dealing here with two healthy hearts of top athletes,” says Hofmann. “But it’s amazing what we can do to the hearth without structural change.” Further studies are to follow, if possible also with heart patients.

P.S.: Nancy and Ralf are about to set off for an expedition to Antarctica – to significantly lower altitudes than simulated at the DLR. 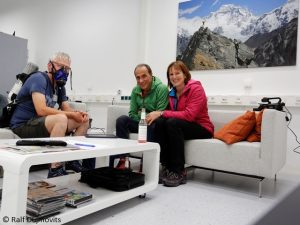 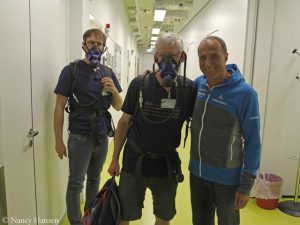 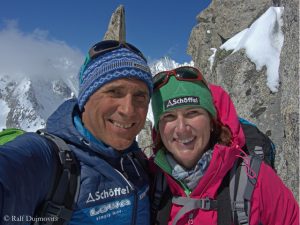