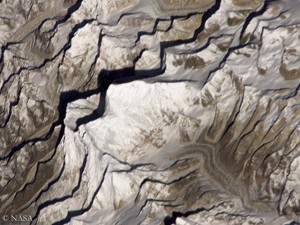 It’s for good reason that the Tibetan east face of Mount Everest is mostly deserted. It towers up steeply 3000 metres into the sky, glaciated with deep crevasses and the permanent risk of avalanches. When in 1921 the legendary British climber George Mallory was looking for a route to scale Everest and saw Kangshung face, he said it would be impossible to climb it. But in 1983 the Americans Carlos Buhler, Kim Momb and Louis Reichardt proved that it was possible. They matched the challenge using bottled oxygen. The expedition was successful very much thanks to the brilliant leading by George Lowe from Utah.

At his limit and beyond

Paul Teare (below) in the Kangshung face

Five years later Stephen Venables, Paul Teare from Canada and the Americans Robert Anderson and Ed Webster opened a new route via the face and did it without oxygen masks. The route led to the South Col. Teare decided to descend from there, because he had symptoms of a high cerebral edema. Webster returned just below, Anderson from the 8690-meter-high South Summit. Only Venables reached the highest point on 8850 metres. On his descent he lost more and more of his power, he hallucinated. „I was at my absolute physiological limit”, Stephen later said in an interview. „All that day was a crossing barriers.” Below South Summit he bivouaced in open – and survived. But the odyssey continued. It took the three climbers three more days to descend via the Kangshung face, through waist-deep snow, in a white out and with no food. „Our ascent of the Kangshung was, for the four of us, the adventure of a lifetime”, Ed Webster wrote subsequently.

Stephen lost three toes which were frozen and later had to be amputated. He was 34 years old, the expediton to the Kangshung face was his tenth in the Himalayas. In 1991 Venables climbed together with two Britons a new route on the 6000-metre-peak Kusum Kanguru near Everest. One year later he belonged to the British climbers who did the first ascent of  the 6437-metre-high Panch Chuli V in the Indian part of Himalaya. During the descent Stephen broke both his legs in a 80-metre-fall. Venables knew that it could have ended even worse. He finished to take part in extreme Himalayan expeditions. But the 58-year-old Briton is still climbing. In the past years he has often visited Antarctica, in particular the island of South Georgia.

It’s not fair to reduce a man’s lifetime to an Everest expedition of two months. But Venables’ survival story on Mount Everest will always remain unforgotten. „It would be wonderful if Everest became again a place where climbers push the limits of human endeavour in an atmosphere of quiet contemplation: just three or four expeditions per year, climbing without supplementary oxygen, enjoying a sense of adventurous uncertainty”, Stephen answered my question, what he wishes Mount Everest for the future. He knows that this „will never happen, because it is not compatible with commercial imperatives.”

P.S.: You find Stephen’s full statements on the two Everest-60-pinboards on the right side of the blog.