A violent gust of wind had blown the 36-year-old with his tent from a height of about 6,900 meters from the northeast ridge into the depths. His team partner Waldemar Dominik was an eyewitness of the accident. The Pole had had a bad feeling about the place that Simone had chosen and had searched for an alternative spot. When he returned, he saw from close by how the tent was caught by the gust. Dominik descended to the base camp and sounded the alarm. The body of La Terras was found and recovered the next day at an altitude of 6,100 meters.

It is not uncommon that climbers die in their tents. Objectively, the highest risk of death in the tent is the Grim Reaper coming in the form of high altitude sickness. But as in La Terra’s case, there can also be dangers from outside. In the history of Himalayan mountaineering many climbers lost their lives because they were caught by avalanches while lying in the tent. Just remember the avalanche on 22 September 2012 on the eight-thousander Manaslu, which hit two high camps in the early morning and killed eleven climbers.

One step away from tragedy 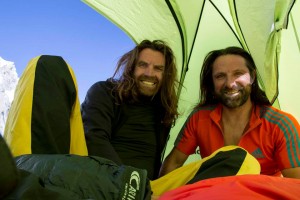 Alexander (r.) and Thomas Huber in summer 2015 in the Karakoram

Alexander and Thomas Huber had better luck in summer 2015 on the 6946-meter-high Latok III in the Karakoram. The Huber brothers and their teammates Mario Walder and Dani Arnold were almost blown out of the wall by the blast wave of an ice avalanche. “We were lucky that we had dug out a small platform to position the tents perfectly. The small snow edge of this platform has saved our lives. Otherwise we would have been blown away,” Alexander Huber told me then. “It was much, much closer than I ever imagined. And that’s shocking.”

Blown along the ledge

Also the third ascent of Kangchenjunga in 1979 by a British expedition was not far away from a “tent tragedy”, when a storm broke loose in the summit area. “At 1.30 a.m. on 5 May the wind changed direction and rapidly increased in violence which snapped the centre hoop of the double-skin tunnel tent,” Doug Scott wrote at that time. “The team soon had their boots and gaiters on but at 2.30 a.m. the tent was blown two feet (about 60 centimeters) along the ledge.” The climbers left the tent on the double. A little later, it was torn by the storm and disappeared in the depths.

P.S.: After the first summit success of the 8000er spring season on Lhotse, one more from another eight-thousander was reported on Thursday. “The Himalayan Times” reported that Chinese Gao Xiaodan and her Climbing Sherpas Nima Gyalzen Sherpa, Jit Bahadur Sherpa and Ang Dawa Sherpa had reached the 8,485-meter summit of Makalu, the fifth highest mountain on earth. The 35-year-old from Lanzhou City, located in northwestern China, had not used bottled oxygen, it said. In spring 2017, Gao had scaled Mount Everest and three days later Lhotse too, both with breathing mask.