10 years of IMS: The last hike 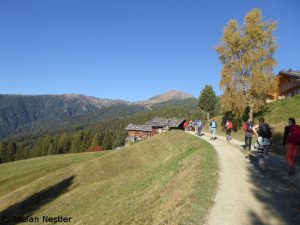 IMS walk to the Latzfonserkreuz

I will miss the IMS. After ten years of “International Mountain Summit” in Brixen it’s over. The voluntary organisers, Alex Ploner and Markus Gaiser, who had put a lot of heartblood into this extraordinary mountain festival every year, are throwing in the towel. The reason: Lack of support from outside. A real pity! Year after year at the IMS, former and current stars of the scene were streaming in and out: Reinhold Messner, Sir Chris Bonington, Doug Scott, the Huber brother, Steve House, Alex Honnold, Ueli Steck, Gerlinde Kaltenbrunner, Ralf Dujmovits and so on. Not only did they give lectures, but they also went hiking with other mountain friends in the mountains of South Tyrol. That was the special attraction of the IMS. I have always enjoyed this “walk and talk” very much.