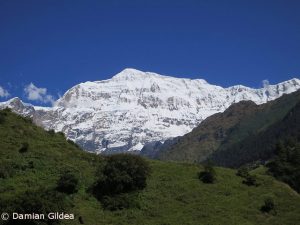 Sad news from the 7193-meter-high Gurja Himal in western Nepal: Nine members of a Korean expedition died there according to the Nepalese operator “Trekking Camp Nepal”. A violent snow storm followed by a landslide completely devastated the base camp of the expedition at 3,500 meters. A helicopter crew saw seven bodies, two more climbers were missing. According to the operator, five Koreans and four Nepalese died.