Women wrestlers take on rivals and tradition in south Iraq 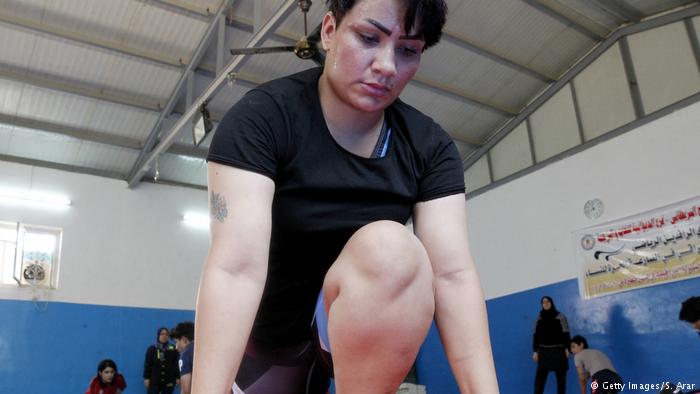 Taking on a sport largely reserved for men in a region with strict traditions was quite a challenge but one that both Nehaya Dhaher and young female sports fans embraced.

Sports teacher Nehaya Dhaher was living a quiet life looking after her elderly mother in Iraq’s tribal south when she was asked to set up the country’s first women’s wrestling squad.

“Recruiting wasn’t a problem,” said Dhaher, a tight blue hijab framing her round face. “On the other hand, it’s been difficult to convince society because our traditions aren’t really headed in this direction,” the 52-year-old told AFP. 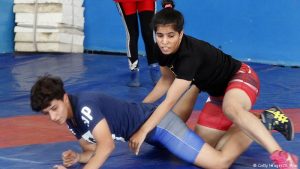 Iraqi female wrestlers practise at a gym in Diwaniyahh, around 160 kilometres (100 miles) south of the capital Baghdad, on October 7, 2018.

Dhaher was working as a school sports teacher and trainer at a sports club but never imagined that one day she would be coaching a group of young female wrestlers in her conservative city of Diwaniyah.

But when the Iraqi Wrestling Federation approached her two years ago with the opportunity to lead the team due to her proven track record with women athletes, she leapt at the chance. To start off, she found five volunteers at her local sports club to train the Al-Rafidain — “the two rivers” — whose name pays tribute to Iraq’s mighty Tigris and Euphrates.

Today, the team has about 20 members aged from around 15 to 30 who train three times a week in two-hour sessions after school. On a broad blue mat with a red circle at its centre, the wrestlers tumble with determination under the watchful eye of Dhaher, wearing a grey tracksuit. The gym’s windows are thrown wide open to ease the stifling heat.

Taking on a sport largely reserved for men, Iraq’s first women’s wrestling squad grapples in the ring but it also wrangles with strict traditions in the country’s tribal south.

Dressed in an assortment of shorts, tights and T-shirts, the young women alternate between stretches and sparring drills.
But when training ends, the wrestlers file out of the building in long robes, most of them wearing headscarves, seamlessly blending into the city where most women are cloaked in black.

“Here, the tribes rule the lives of all. I’ve received direct and indirect threats but we’ve managed to win respect,” said Dhaher. To do so, they had to put in more effort than the average coach, according to Dhaher’s assistant, Nadia Saeb. “We’ve built bonds of trust with the wrestlers’ families,” she told AFP. “We look after the girls, picking them up from their home before practise and returning them afterwards,” she said. “We even follow up on their schooling,” added the 47-year-old proudly.

The approach has paid off. At first unsure what to make of the sport’s new female competitors, today people in Diwaniyah come out to support the team during competitions, according to Dhaher. Al-Rafidain’s success has pushed others elsewhere in Iraq to try the same, with women’s teams popping up in the ethnically mixed city of Kirkuk, north of the capital, and in Basra in the country’s far south. 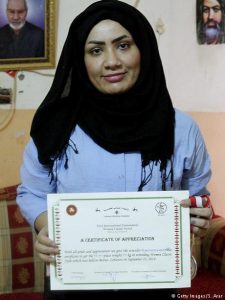 Iraqi female wrestler Alia Hussein poses with her certificate of appreciation awarded by the Lebanese Wrestling Federation, after winning the silver medal during the world championships held in Lebanon

As the sport gained popularity across the country, “little by little, people finally accepted us”, said Alia Hussein, the team’s star who sports a stylish short haircut. In September, she won a silver medal at the Women Classic International Tournament in Beirut in the under 75 kilo category. Alongside her budding wrestling career, the 26-year-old hopes to finish her high school diploma after having put her studies on hold to help her family.

After graduating, she hopes to study physical education at university. Her mother, who has adorned their modest family home with Alia’s trophies alongside paintings showing revered Shiite imams and figures, has always been supportive. “We’re sure of what we do, so people can say what they want — we don’t care, we haven’t done anything wrong, so no one has the right to say anything,” she said.

Wrestling federation chief Ahmad Shamseddine has been supportive of Iraq’s women wrestlers since day one. When Al-Rafidain first got started in 2016, the federation was only able to give it “a very small budget”, with about $40 (35 euros) a month allocated to each member, he said. But in 2019, he added, “they will have more because the team has had good results”.