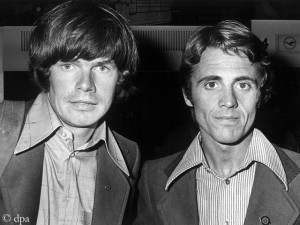 “Are we still thinking clearly?” 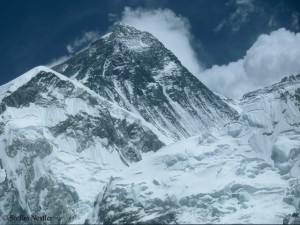 There had been a lot of critics and skeptics in the run-up, Reinhold Messner once told me in an interview. That spurred him. “Basically, I just wanted to make an example then, to give it a try. I did not know how far I would come.” Even during their ascent on 8 May 1978, Habeler and he still doubted whether they would get out of this number without suffering any harm, said Messner: “At every break, we looked at each other: Are we still thinking clearly? Is it still responsible or not?” At minus 40 degrees Celsius, in a storm, they fought their way up. “In the final phase we reached the summit really more on our knees and hands than walking, otherwise we would have been blown off the ridge,” reported Messner.

For Peter Habeler, it was in his own words “a very emotional moment” when they finally stood on the roof of the world. However, he could not enjoy it. “I remember being scared,” Habeler said when I met him a few months ago. “I was very restless because I wanted to go down. I thought: Oops, how can I get down the Hillary Step, without belaying? We had noticed on the ascent that the snow was there in a bad condition. I feared a step could break off and I would fall into the depth. But somehow it worked.” After returning home, he was surprised by the huge media coverage, Habeler said: “It was a real hype.” 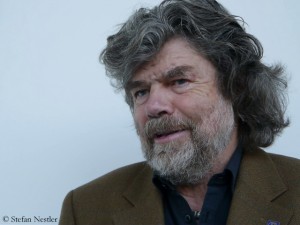 Even today, there is still an Everest media hype, only that it rarely has to do with ascents without bottled oxygen, but rather with the mass of climbers who tackle the highest of all mountains year after year. “If there are a thousand people in the base camp and 540 of them want to set off during a single good weather window, I feel uneasy about it,” said Habeler. “That’s not my way of climbing mountains.” The two former pioneers agree on this point. “Nowadays, I certainly wouldn’t climb Everest without bottled oxygen,” Reinhold Messner told me on the occasion of his 70th birthday in September 2014.  “At my age I don’t want to die in the mountains, after working for 65 years to do everything I can to not die there.  To head up Everest with two oxygen bottles and two Sherpas, one at the front and one at the back, is not my idea of fun.”