Precht was a mountain guide and a carpenter by trade, but he made his money as a train driver for the Austrian Federal Railways. He started to climb lately but then the more passionate. With 21 years he succeeded in climbing his first new route in the Alps. The information on how many first ascents he did until his death, vary between 800 and 1,000, not only in the Alps, but also in Norway, Corsica, Jordan or Oman. Albert was an advocate of strict climbing ethics, his credo: No first ascent with bolts. Also his free solo climbs were sensational. “The ultimate challenge is to climb a new route, solo without any tool. Climbing solo means adventure without safety net”, Precht said once in an interview with the magazine of the Austrian Alpine Club.

He was not able to climb the highest mountains: “I had problems with high altitude as I experienced three times. Thus my way did not lead to the eight-thousanders, alas!”As an extreme climber Albert Precht was aware of the risk to lose his life: “When I remember some of these situations, I have to confess that there was a will to let it go, to get rid of the obsession to survive. But this confrontation with death was always a deep feeling of life too.” 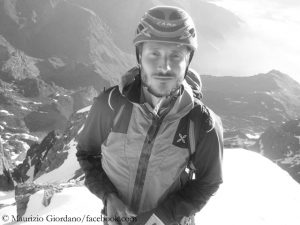