Small stone out of Everest crown 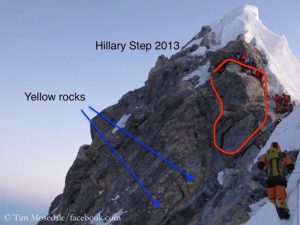 Mountains are changing – even faster and more clearly visible than before due to climate change. In case of the Hillary Step, however, it was probably the devastating earthquake in Nepal on 25 April 2015 that made the rock fall. Everest-experienced British expedition leader Tim Mosedale already pointed out in 2017 that the former rock climbing passage was now just a snowy slope, much easier to overcome than before. Mosedale substantiated his claim with pictures. Even then the Government of Nepal considered this a kind of a lèse-majeste, though in fact only a rather small stone had been broken out of Everest crown. Actually, the Ministry of Tourism should even be happy about this alleged mishap: A bottleneck less, which used to be a frequent source of traffic jams, which had a negative effect not only on safety, but also on Everest marketing.

Sir Edmund Hillary is probably laughing in climbers’ heaven at the government’s ridiculous attempts to hush up what hundreds of mountaineers have seen with their own eyes: the twelve-meter high boulder, a real hurdle that Hillary once had had mastered first, no longer exists. On the first ascent in 1953, the New Zealander had taken heart and had climbed up through a thin crack between rock and ice. “It was then for the first time that I knew that we were going to get to the top,“ the Everest pioneer once said about this last key section that had been named after him. The New Zealander died in 2008 aged 88.

As many successes as never before

Sir Ed was critical of commercial climbing on Everest. “There are people who hardly understand mountaineering,“ the Everest pioneer told me when I interviewed him in 2000. “They do not care about the mountain. They have paid $ 65,000 and all they want is to set foot on the summit, go home and boast about it.” In the just finished 2018 spring season, ten years after Hillary’s death, reportedly a total of more than 700 climbers reached the 8,850 meter high summit ascending from the south and the north side of the mountain. Even if Billi Bierling and her staff working for the chronicle “Himalayan Database” have yet to confirm the information, the season will probably be the most successful in Everest history, as measured by the number of summit successes. And the third one without Hillary Step.