This was not the case during my first visit to Everest region 14 years ago. In 2002, there was a night-time curfew in Namche Bazaar starting at 5 p.m. because of the civil war with the Maoists. The soldiers of the local military station were nervous, I heard shots. It was only when we reached Tengboche monastery at 3,860 meters, that my former mountain guide Gowa Lama said: “Now we are safe. The Maoists have not penetrated higher so far.” The civil war in Nepal has been over since 2006. Ten years later we were able to hike through the impressive mountains of the Himalayas without need to think about charges to pay to rebels or about getting caught in the crossfire.

Most of the debris cleared Stupa in front of the Hillary School in Khumjung

The earthquake on 25 April 2015 has left marks also in Khumbu, but the area got off rather lightly compared for instance with the particularly hard-hit Sindhupalchowk District. Here and there some stupas (tombs of Buddhist lamas who according to religion were reborn) with deep cracks still witness the earthquake. But most of the debris has been cleared. In many places, new buildings have already replaced the collapsed houses, which had been mostly traditional Sherpa buildings. The trekking trails are well maintained, virtually no traces of the earthquake can be seen there. Everest, Lhotse and Makalu (from l. to r.)

Maybe I also felt so safe in Khumbu because there was much less talk about the earthquake. People in the Everest region seem to have come to terms with last year’s natural disaster and ticked it off. Probably because they were affected not that bad. The consequences of the earthquake were more indirectly: The tourism market collapsed because foreigners were worried about their safety. My impression in Khumbu: These concerns are groundless. You can travel there without worrying. The mountain guides, porters, farmers, lodge owners and shopkeepers, who heavily depend on income from tourism, will thank you: with great hospitality and an honest smile. 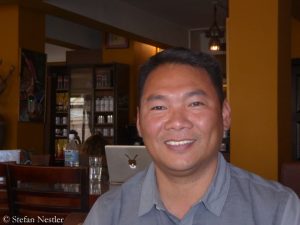