On Nanga Parbat in summer 2017

Also on Nanga Parbat, Mingma had made a second ascent in last year’s fall because he had not been sure whether he had really found the highest point in bad weather during his first summit attempt in summer. More than three months later, he reached the summit beyond doubt with several clients. “Conditions were much better in September than in summer,” says Mingma. “Perhaps it is really the formula for success in the future to tackle this eight-thousander later in the year.”

Everest (l.) and Lhotse (in the middle)

At the beginning of April, Mingma will set off for a Lhotse-Everest expedition. First, he wants to lead two Chinese clients to the 8516-meter-high summit of Lhotse, then seven Chinese to the top of the 8850-meter-high Mount Everest. As in the previous year, the Sherpa is looking to be successful early in the season: “I am quite sure that we will be the first team on the summit of Lhotse. We are planning to reach it at the end of April or in the first week of May.” He then wants to turn to Everest that he has already scaled five times (with bottled oxygen). The prospect of a crowded normal route does not deter Mingma. “It’s okay for me,” says the expedition leader. “We take only very experienced Sherpas and make sure our teams are not too big.”

Mingma on the summit of K2

Mingma Gyalje Sherpa does not like expedition operators who offer dumping prices. “Low budget means low safety. If you want to have experienced and well-trained Climbing Sherpas and thus more safety, you also have to pay them better,” says Mingma, who himself has a mountain guide certificate of the UIAGM (International Federation of Mountain Guide Associations). “The discounters should know that they are dealing with the people’s life. Actually, we need minimum standards for expedition operators, but I’m skeptical that we’ll ever get them.”

“Other rules are required”

Mingma puts little hope in the government. The new rule, which has meanwhile been overruled by the Nepalese Supreme Court, no longer to grant permits to double amputees and blind climbers, is discriminatory, says the Sherpa: “There are a lot of disabled climbers who are more capable than non-disabled.” Other rules are required to reduce the number of summit aspirants on Everest, finds Mingma: “So if someone wants to climb Everest, he must have scaled another eight-thousander before. Or he must have at least the qualification of climbing 7,000 meters.”

Goal: All 8000ers without breathing mask 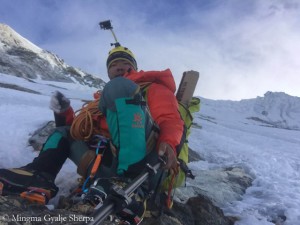 For now Mingma Gyalje Sherpa puts his personal ambitions as a climber on the backburner. But that does not mean that he has given up his big dream. The 31-year-old wants to become the first Nepalese who has scaled all 14 eight-thousanders without bottled oxygen. “There are still three left in my collection,” says Mingma, meaning Mount Everest, Gasherbrum II and Shishapangma. If we add Broad Peak (see above), it would be four. “This year, I have to focus on leading my clients safely on Everest. That’s why I can not do it without breathing mask. But maybe I’ll try it in 2019.”