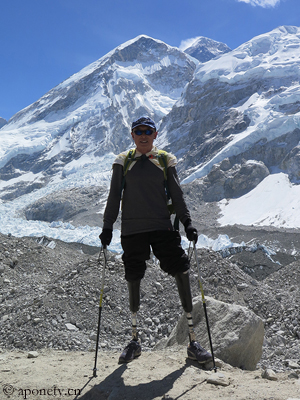 He never gave up

For Xia Boyu finally fulfilled his lifelong dream to stand on the roof of the world. At his first try in 1975, his team had got into bad weather about 250 meters below the summit. The Chinese climbers had to spend two days and three nights at an altitude of 8,600 meters at temperatures of minus 25 degrees Celsius. The following night, at 7,600 meters, Xia left his sleeping bag to a teammate who had got into serious trouble. He paid his selflessness with severe frostbite, both legs had to be amputated. Later, he also fell ill with lymph node cancer. But Xia did not give up his hope of reaching the top of Everest. He began climbing again with prostheses – and returned to Everest in 2014. Because of the avalanche disaster in Khumbu Icefall killing 16 climbers Xia had to return home then empty handed, as well as in 2015 after the devastating earthquake in Nepal. In spring 2016, Xia failed due to bad weather about 100 meters below the summit.

Rope fixing team from the north on the summit too 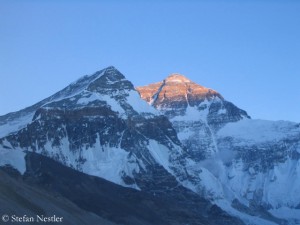 On Sunday, eight Sherpas had succeeded the season’s first Everest summit success. They fixed the ropes to the highest point, clearing the way for the commercial expedition teams. Mingma’s team was the first one to follow them. Also on the Everest north side, the ropes are now fixed to the highest point. This is reported by the operator “Climbalaya”. The Nepalese boy scout Anish Luitel was part of the successful team, it said. The 26-year-old wanted to climb Everest on behalf of all Scouts worldwide. For Anish it was the second Everest summit success after 2016.

Another successful ascent is reported from Cho Oyu, where the German expedition leader of the operator “Summit Climb”, Felix Berg, one of his clients and Dawa Jangbu Sherpa reached the summit. In the run-up Felix had written to me that they wanted to ascend without breathing masks. Just over a week ago, a team of the US operator Alpenglow Expeditions led by Adrian Ballinger had reached the highest point of Cho Oyu – with bottled oxygen.

The early eight-thousander bird catches the worm. Mingma Gyalje Sherpa once again lived up to his reputation as an early starter and booked the first eight-thousander summit success of this spring season on the 8516-meter-high Lhotse, the fourth highest mountain in the world.