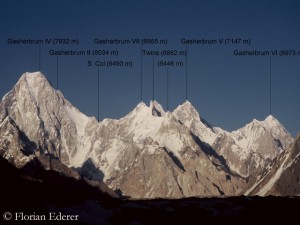 The two Poles Adam Bielecki and Jacek Czech as well as the German Felix Berg will be on the road in the Gasherbrum massif. The trio will acclimatize on the 8,035 meter-high Gasherbrum II, afterwards the three climbers will try to open a new route via the East Face of the 7925-meter-high Gasherbrum IV.  Another possible destination is the still unclimbed 6,955-meter-high Gasherbrum VII. In May, Felix Berg had summited the eight-thousander Cho Oyu in Tibet without bottled oxygen. In spring 2017, Bielecki and Berg together with the Canadian Louis Rousseau and the British Rick Allen had tried to climb the Annapurna Northwest Face, but had had to give up because of bad weather.

Eight-thousander No. 8 for von Melle and Stitzinger?

The German mountaineering couple Alix von Melle and Luis Stitzinger – both have seven eight-thousander summit successes on their account – also head for the Gasherbrum massif. The 46-year-old and her three years older husband want to climb Gasherbrum I, also known as Hidden Peak, in Alpine style from the south. They have their skis with them. Before that, Alix and Luis try to first climb the 7082-meter-high Urdok Kangri II with a team of the German expedition operator Amical alpin.  Luis will lead the group.

Several expedition teams pitch their tents at K2 (8,611 meter) and neighbouring Broad Peak (8,051 meter). As in summer 2017, the Pole Andrzej Bargiel has planned the first complete ski descent from the summit of K2, the second highest mountain in the world.