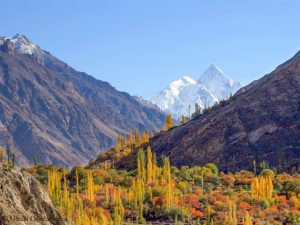 “This ascent is very unique to me, because I was dreaming of it for the last four years,” writes Auer. “Since Kunyang Chhish East in 2013 (when he, his brother Matthias Auer and the Swiss Simon Anthamatten made the first ascent of this 7400-meter-high mountain in the Karakoram) I always wanted to know how it feels to be alone in high altitude. And I’m happy that I made this experience now.“

Hansjörg Auer dedicates the first ascent of the West Face to his late friend Gerry Fiegl. In fall 2015, Auer, Blümel and Fiegl had mastered the South Face of the 6839-meter-high Nilgiri South in western Nepal for the first time. Gerry had shown symptoms of high altitude sickness at the summit and had fallen to his death on the descent.

The rarely attempted seven-thousander Lupghar Sar – which means “top of the big rock” – has three almost equally high summits and is located in the Hunza region in northern Pakistan. The West Summit was first climbed on 18 June 1979 by the German brothers Hans and Sepp Gloggner, who were part of an eight-member expedition team from Tegernsee.