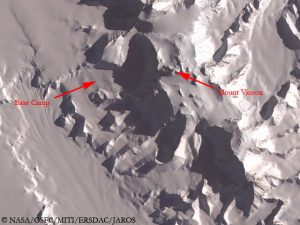 No information about emergency plans

Vinson Base Camp in good weather

After all, an Ilyushin cargo plane was able to fly from Punta Arenas in southern Chile to Union Glacier Camp on the edge of Antarctica. However, the bad weather at Mount Vinson prevents airplanes from taking off and landing at the base camp. “We have been eating only one warm meal a day from rations of which the expiration date passed a year ago,” wrote Manuel Möller from the Amical team on Christmas Eve. “ALE (Antarctic Logistics & Expeditions – the US company that organizes the flights to and from Antarctica) apparently has no Plan B. And the atmosphere here in the camp is slowly getting more nervous.” It is unlikely to have improved over the holidays – especially as the meteorologists are predicting snowfall at Mount Vinson for the coming days. So the adjourned game continues. “Our expedition leader Willi Comploi says we’ll have to come up with something soon if the team can’t be taken out in the next few days,” says Dominik Müller, who, in his own words, tried several times in vain to get information from ALE about possible emergency plans.

Meanwhile the US adventurer Colin O’Brady has successfully completed his solo crossing of Antarctica over a distance of almost 1500 kilometres, without any support. “Day 54: Finish line!!! I did it,” the 33-year-old wrote on Instagram and posted a picture which, according to him, showed him on the edge of the Ross Ice Shelf. Almost two months ago, O’Brady had started with his sled from Union Glacier – at the same time as British Louis Rudd, who is expected at the finish line in a day or two. The first unsupported solo crossing of Antarctica had been achieved by Norwegian Borge Ousland at the beginning of 1997. He had overcome a distance of 2845 kilometers (!), also using a kite to move faster.

Update 28 December: Breathe a sigh of relief! The climbers who were stuck for a week and a half at Mount Vinson could be flown out to the research station at Union Glacier. “The atmosphere is correspondingly cheerful,” writes Manuel Möller from the Amical alpin team to me.