At the age of seven to the monastery 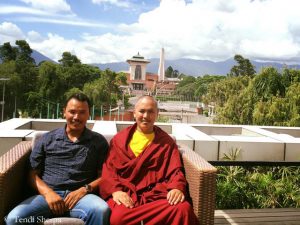 I would not have taken much more and Tendi Sherpa would be a Buddhist monk today. When he was seven years old, his parents sent him as the eldest son to the monastery. Aged twelve, he returned to his home village near the eight-thousander Makalu, because it turned out that his younger brother was better suited for a religious career than Tendi: “My brother was more interested in becoming a monk. I myself played a lot and always wanted to explore.” His father earned the family’s living as a porter of trekking groups. “Every time when he came back home, he brought chocolate and toys. And he said: ‘That is a gift from the tourists.’ And I really wanted to see those tourists,” recalls Tendi.

He annoyed his parents until they let him go to Kathmandu at the age of 13. „I had neither shoes nor sandals. I didn’t know that they existed,” says the Sherpa. “I said: What happened? Where are your feet? I have all my fingers and toes, and you have nothing!”

Tendi: Without shoes to Kathmandu

Tendi got his first job as a porter, although the owner of the trekking agency had actually rejected him as too young and too weak. A friend of his father advised him to hide in the bus and only stir when they were already en route. “I was just little enough to fit under the seat,” recalls Tendi. “I still look now every time under the seat of a bus and ask myself: How did I fit in there?”

Tendi: Hidden under the seat of the bus

43 kilos on his back 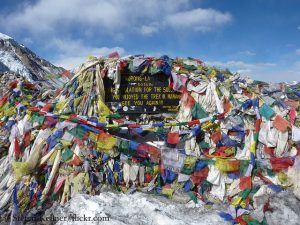 For three and a half weeks, the little Sherpa carried a load of 43 kilograms on the Annapurna Circuit – for a wage of one and a half dollars a day. “At first, I could not move my neck in the evening. I had to turn my whole body,” says Tendi. “The first thing I learned from this trek: You should not work as a porter at the age of 13, not even 15. You should not work as a porter unless you are 18.” Today he always hires for his groups a porter guide who has knowledge about the mountains, climbing techniques and high altitude sickness and who takes care of proper clothing and equipment of the porters.

On the roof of the world

In 2003, Tendi first worked on Everest, as a member of a Japanese cleaning expedition. At that time, 25 Sherpas brought eight tons of garbage off the mountain, and Tendi climbed up to the South Col at about 8,000 meters. “It was something very important for me to begin my profession on Everest this way,“ says Tendi. “It taught me a lot of respect towards the mountain, towards the people, towards the environment, how we should keep the mountain clean.” In 2004, he reached the summit of Everest for the first time, leading a client via the Northeast Ridge: “We keep going, going and going. Suddenly there are a lot of prayer flags. What is it? Actually, that is the summit. I realize I am at the top of Everest, now everything is great.”

On the descent, Tendi saved the life of his Bulgarian client when he left his breathing mask and oxygen bottle to him at 8,700 meters. “The summit of Everest was not a real summit for me,” says the Sherpa. “When you come back to your home, see your family, celebrate your success, share your experience, see them get excited about your story, I think that’s a bigger summit. If you have lost your life on the way up there, there is no point.”

Tendi: The real summit of Everest

As a co-owner of the Nepalese expedition operator “TAGnepal”, Tendi’s top priority is safety. That’s why he always uses bottled oxygen on Everest. “If I get sick on the way down or the way up, is it my client who will rescue me, his guide? That would be awful,” says Tendi and laughs. “That’s why I always make sure that I use oxygen and that I am strong enough to help my clients in case he or she needs help.”

Tendi: Not without O2

Helicopter rescue on Everest is dangerous 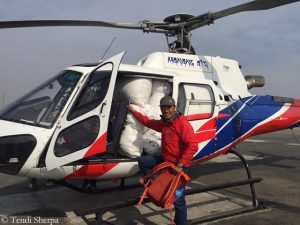 The Sherpa has a international mountain guide certificate from UIAGM (International Federation of Mountain Guide Associations). In 2011 he also completed training in longline helicopter rescue in Sion in Switzerland. He warns Everest candidates to rely on help coming from the air in an emergency: “Longline rescue above 6,000 meters is actually too dangerous and really tough. The helicopter has to fly through a super narrow corridor between Nuptse, Lhotse and Everest. Only if there are no clouds and no wind, a rescue is possible.” Above the South Col, climbers who get into trouble have to be brought down anyway, says Tendi. “The higher you get, the more difficult it is for the rescuers.”

Never made a knot

Tendi in the Khumbu Icefall

Tendi complains that in recent years many inexperienced climbers have tackled Everest: “Some people have no knowledge on any rope, they don’t know what crampons mean, they don’t know what a harness is, they never have done one knot with a rope.” Last year, he received 28 requests for Everest, reports the guide. “I have not accepted any of them.” Tendi Sherpa advises such people to first gain alpine experience on lower mountains: “You are rich, you have money, just don’t jump on Everest! Try to make sure that you first make a training!”