Second attempt. This spring, Maya Sherpa, one of Nepal’s most famous and best female climbers, will tackle Kangchenjunga, the third highest mountain in the world. “I am happy to go there again,“ the 40-year-old told me as we met in Kathmandu last week. “I have found sponsors who support me. However, my goal is not only to climb Kangchenjunga, I like to climb more 8,000-meter-peaks as the first Nepali woman.” In May 2017, Maya and her Nepalese friends and teammates Pasang Lhamu Sherpa Akita and Dawa Yangzum Sherpa had had to turn around on the 8,586-meter-high Kangchenjunga, about 300 meters below the highest point. The entire group of summit candidates had run out of ropes. “One of our Climbing Sherpas told us then that they had made the same mistake in spring 2013,” said Maya. “At that time, they went up to the summit. On descent, two Sherpas and three foreign climbers died because there was no rope, they were tired and it was extremely slippery in the upper part of the mountain, especially on the rock.”

Maya Sherpa, Dawa Yangzum Sherpa and Pasang Lhamu Sherpa (from the right) on Kangchenjunga in 2017

It is not an option to move the last high camp on Kangchenjunga at 7,400 meters further up, says Maya: “I saw no safe place for tents there. We need enough ropes and manpower, that’s the solution.” The three Sherpani, who became the first Nepalese women to climb K2 in Pakistan, the second highest mountain in the world, in 2014, will not be complete up this time. Pasang Lhamu gave birth to a son last November and is missing this time. It’s still open whether Dawa Yangzum will come along. “There are still two weeks to go. Let’s see what happens,” says Maya. “Otherwise, I go alone, with other people.” 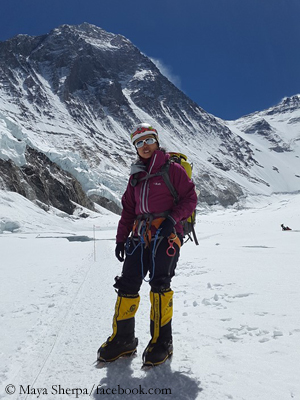 Maya Sherpa has stood her ground as a woman in the men’s world of mountain climbing. She is a professional climber since 2003. With her husband, the expedition operator Arnold Coster, she leads expeditions and works as a mountain guide. The mother of a seven-year-old daughter has scaled Mount Everest from both sides, to date a total of three times. She was also the first female Nepali woman on Cho Oyu (8,188 m) in Tibet, Pumori (7,161 m), Baruntse (7,129 m) and Ama Dablam (6,814 m) in Nepal and on Khan Tengri (7,010 meters) in Kyrgyzstan.


In addition, Maya is president of the “Everest Summiteers Association” – and, since last August, also Vice President of the Nepal Mountaineering Association (NMA).”I feel very proud. I never thought that I was going to be elected.” She says, she wants to take care of all climbers, not just for women. “Ever since I’ve been climbing, I’ve been giving other women an example of what’s possible. I love to share my experiences and give advice to them. I think that helps.” In the meantime, she is not only accepted by her male Sherpa colleagues, but also by the clients. “Physically, women may be a bit weaker,“ says Maya. „But if you‘re mentally strong, this doesn‘t matter.”