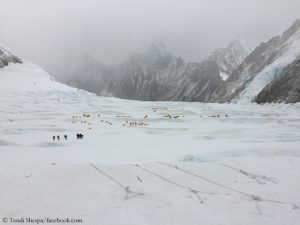 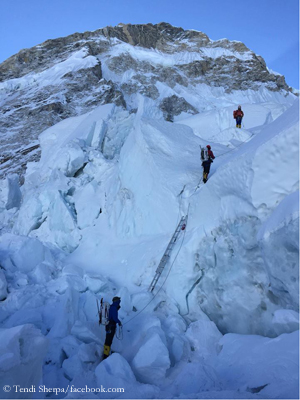 Route through the Icefall

Most commercial teams have completed their first acclimatization rotation on the mountain with overnight stays in Camp 1 (6,000 m) or Camp 2 (6,400 meters) and are recovering at Everest Base Camp. The team leaders unanimously praise the quality and safety of the route through the Khumbu Icefall, prepared by the “Icefall Doctors”. An incident on Wednesday did not change that. A serac collapsed, two Sherpas were slightly injured. “Incidents like an ice collapse or small avalanches are normal on the mountains,” said Ang Dorjee Sherpa, head of the Sagarmatha Pollution Control Committee (SPCC) to the newspaper “Himalayan Times”.

On Saturday, Romanian Horia Colibasanu and Slovak Peter Hamor want to set off from Base Camp to pitch up their Camp 2 at 7.000 meters and spend four to five days there. The two Europeans want to traverse the summits of Mount Everest and Lhotse, without bottled oxygen, according to their own words on a new route. In 2017, Ueli Steck had also planned to do the Everest-Lhotse traverse. Next Monday is the first anniversary of Ueli’s death. The Swiss top climber had fallen to death during an acclimatization climb on Nuptse.

Update 28 April: “Today we fixed till 8200m on Lhotse(8516m). Tomorrow we hopefully get to Lhotse summit,” writes Mingma Gyalje Sherpa on Facebook.